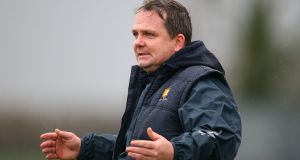 Clare manager Davy Fitzgerald: his changes in the panel and backroom personnel has raised optimism in the county. Photograph: Inpho

Derry v Tyrone, Athletic Grounds, 7.30 – Tyrone have been the driving force in this competition since it was resumed in 2003 and have won it eight times since, which reflects Mickey Harte’s enthusiasm for tournament. This is the third of at least five meetings between the counties this year – league and championship to come – and Tyrone have won both to date in the group stages of this competition and the Ó Fiaich Cup semi-final. The injection of All Star quality – Matthew Donnelly and Seán Cavanagh - helped to break Fermanagh in the second half of the semi-final. Derry under Damian Barton have looked lively going forward and Ryan Bell was excellent in the win over Cavan. Tyrone though are primed to extend their own record by winning a fifth successive title and to join Monaghan at the top of the roll of honour.

Limerick v Clare, Gaelic Grounds, 7.30 – Although these counties will be spending spring in Division One B they are likely to be well in the hunt for honours later in the year. David Fitzgerald’s beefing up of both panel and back-room team has raised optimism in Clare whereas the quality of last year’s under-21s as well as the arrival of former Clare strength and conditioning coach Joe O’Connor is having a similar effect in Limerick. Both have beaten Cork, Waterford and Kerry (Tipperary opted out) but Clare might have the edge,

Kerry v Waterford, Fitzgerald Stadium, 2.0 – Important pre-season for both counties with life in Division One B on Kerry’s horizon and Derek McGrath auditioning furiously to bolster Waterford for the “difficult” second album. Away win.

SUNDAY
[Matches at 2.0 unless stated]

Galway v Roscommon, Tuam Stadium – A repeat of last year’s decider with Roscommon bouncing under new management. Both teams will have more than one eye on the league, especially Roscommon who will campaign in Division One. Galway have been experimenting and have a few injuries and whereas the visitors will want to get into gear for Monaghan they won’t overdo it here.

Nonetheless Roscommon have looked the more impressive and were deserved winners over Mayo in Castlebar.

Meath v Longford, Páirc Tailteann, 2.30 – Longford sprang a surprise last week, removing the first of Dublin’s titles from 2015. Despite Denis Connerton’s lament about the number of players unwilling to enlist, Longford looked structured and robust in a strong finish and have some good younger players coming through from recent under-21 sides, including the manager’s son Liam who got the crucial goal against Dublin.

Meath were rusty in dispatching Louth and will hope to do better at centrefield and be more focused in attack. Longford will be hopping for this but the hosts have room for improvement and presumably won’t be playing with 14 for the last quarter. They can win their first O’Byrne Cup for 10 years.

Bord na Mona Walsh Cup semi-finals
Dublin v Galway, Parnell, Park – The scene of the crime for Dublin last year when the championship drubbing demoralised their season. Ger Cunningham’s side have been in fluent from this month but under new management Galway have been defending well and can win this.

Wexford v Offaly, New Ross – Wexford have looked the more buoyant of these teams despite missing their Oulart players. Offaly eventually saw off an experimental Kilkenny side and will be up against it here, as Eamonn Kelly builds for the future.

A busy season resumes for St Mary’s whose involvement with South Kerry at senior level necessitated weekly matches. They are favourites against a Ratoath side whose supporters are baffled at the scheduling that sees neighbours Curraha playing their junior semi-final in a different Limerick venue more than 20 miles away.

Abbeyknockmoy (Galway) v Creggan (Antrim), Páirc Tailteann, 1.0 – Creggan won the junior All-Ireland two years ago and like their successors Bennettsbridge are now a match away from the intermediate final. The unexpected Galway champions however look slightly more likely to progress.

Mayo return focus to the pitch after breaking from Tim O’Leary 06:00
Dutch duo on ‘a mission’ to get Ireland to Euro championships 06:00
Kevin Seaward: ‘The first time I wore the Vaporflys, I hated them’ 06:00
Peter Dooley aiming for Ireland caps and beyond 06:00
Gordon D’Arcy: Change was advisable before Twickenham; now it is inescapable 06:00
Here is your handy guide to sport on television this week