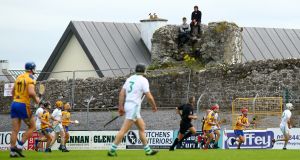 Supporters look on from outside the ground during the Brooks Galway Senior Hurling Championship match between Sarsfields and Portumna at Kenny Park in Athenry on Sunday. Photograph: James Crombie/Inpho

A second successful weekend of resumed club activity has left the GAA cautiously optimistic about some easing of the Government restrictions on match attendances. Doubling the current permitted limit of 200, particularly at the larger county grounds, shouldn’t be “unrealistic”.

As of now that 200 is set to more than double to 500 on August 10th with the commencement of phase four, originally scheduled for July 13th, before the decision to pause left that upper limit as it was. However there is still no guarantee there won’t be another ‘pause’.

It means two more weekends of club matches where the numbers are limited to 200, including players, management and backroom members, even when some matches are being played at county grounds such as the Gaelic Grounds in Limerick and Semple Stadium in Thurles.

“We’ve made our written submission to the Government on this, and are still waiting on some feedback, and whether or not they are in a position to make any move on this,” said Alan Milton, GAA director of communications.

“We felt it was a very realistic case. We weren’t looking for thousands of spectators, or anything like that. It was only looking for a small increase, and to take the players out of that loop, given they’ve already filled in their health questionnaires.

“From the get-go, we’ve made clear we won’t do anything that would undermine the public safety issue. We’ve just made the case for them to revisit this, and that a crowd of say 400 is not unrealistic. A lot of our units are quite strong on this too.”

Former GAA president and MEP Seán Kelly also commented on the 200 limit at the weekend, after observing the Limerick hurling championship matches at the Gaelic Grounds, which has a capacity of 45,000, including 24,000 seated, believing the limit needed to be more “realistic”.

Although the imperative to control Covid-19 remains paramount for both Government and the GAA, Milton was optimistic.

“In fairness to the Government, they’re trying to balance a lot around this, including the reopening of schools, which has a huge impact on society, in so many ways. There are a lot of things in the mix.

“However, there is the argument that if you look at some of the beaches around the country, there are no control measures. What we are trying to do is get a small number of people into quite large venues, in a very controlled way.

“We also have the situation now where they’ve moved on this in the North. There was no stipulation on it, but we went for 400, ourselves, within the six counties, and for every organising unit to manage it on a venue by venue basis. We felt it was prudent to go back in a controlled way like that.

“The challenge for us is the agreement between the North and the South is different on that, and we’ve had a few cross-jurisdiction differences like that. We went from a situation last Thursday where games in the North could have no spectators, to a situation on the Friday where they’re allowed double the amount of the South.”

At some point the GAA may also press for an attendance limit based on the overall ground capacity, given the problems with putting a uniform ceiling on outdoor events. “There is a lot of logic behind that as well, if you’re looking at Wexford Park, or Semple Stadium, if you’re considering some sort of quota.”

Following the decision to stick with crowds of 200, GAA president John Horan went on Morning Ireland and “openly called on” on the Government to review the attendance restrictions governing Gaelic games, just two days after the announcement that phase four of the national exit from lockdown had been deferred, describing it as “a hammer blow to the organisation”.

Horan added: “We put the return to the club game first to benefit our members and help out county boards survive for those clubs but our county boards were relying on an increase to 500 as a way of being able to cater for the demand on the ground from our supporters.”

In the meantime the GAA has also written to all clubs advising them of the need for any members who travel back into Ireland from one of the non green list countries to self-isolate for 14 days, although the difference between jurisdictions means that doesn’t apply in the North.

The relatively incident-free return of club activity has also left Croke Park cautiously optimistic about the planned resumption of intercounty activity in October.

“It’s certainly been very encouraging, at club level, though October is still a long time away,” said Milton.

“Any decision on the championship venues will be done with the representatives of the four provincial councils, but that’s a whole other body of work.”