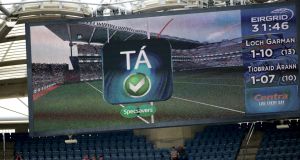 Hawk-Eye: the technology was called upon in the All-Ireland semi-final and during last weekend’s hurling final.

The GAA position on video-assisted technology in Gaelic games is that it is not under consideration at the moment.

This championship season has seen a growing clamour for some form of video review to be built into the games after high-profile incidents such as the Limerick 65 that wasn’t in the All-Ireland semi-final against Kilkenny.

“We have no plans to go down that route, whatsoever,” according to Feargal McGill, the GAA’s head of games administration.

“The slowing down of the games would be a huge concern but also as video review has been rolled out in other sports, it’s becoming increasingly clear that it may not be the solution to all of the problems and still leaves a huge amount of debate.”

The GAA has already embraced technology to a limited extent by installing the Hawk-Eye score detection system to adjudicate on whether points have been scored. Even that has proved controversial with points being called against Tipperary goalkeeper Brian Hogan in both the All-Ireland semi-final and final after he had appeared to catch the ball before it went over the bar.

The argument for increased technology is that it would assist referees in reaching the correct decision but McGill says there are disadvantages to its application in Gaelic games.

“Fundamentally, where our games score over others is their non-stop nature and that would be a significant factor in not pursuing it. The other thing, whether people like it or not, we’re not a professional sport and whereas people reduce it to, ‘sure a couple of extra cameras would be grand’ it wouldn’t – you’d need multiple cameras at games.

“I’m not sure it would be a funding priority for the association and even if we had all the money in the world, I’m not sure it’s the solution because of the stop-start nature of it and whether it’s going to solve all ills or not.”

The matter was raised by Tipperary coach Tommy Dunne after his county had won Sunday’s All-Ireland final.

“Officials try to do the best they can. And it is impossible to get everything right, it really is. But it is certainly time to look at giving them the functional support that can make a difference to them so they have eight or nine out of 10 rated games as opposed to decisions that they are getting wrong and are costing games to teams. I am not saying it will ever be a 100 per cent, but surely it can be closer to 100 than it is now.”

Dickie Murphy, four times an All-Ireland final referee and currently one of the GAA’s Hawk-Eye officials, believes the introduction of such technology wouldn’t be possible in the short term and he shares some of McGill’s misgivings, being aware that even the time it takes to reach a Hawk-Eye deliberation is viewed by some as too much.

“It took 30 seconds and everyone was complaining that it took too long. I had this conversation with Eddie Brennan going into Croke Park last week and it’s about getting the balance right.

“Should it only be for the championship? Should it be like Hawk-Eye and only in Croke Park and Thurles? People give out about that. I don’t think it can happen overnight. It needs to be discussed.

“We have four umpires, two linesmen and a referee as well as the fourth official. That’s eight people altogether, which is a lot more that you have in soccer and rugby.

“It’s been called for at various times this summer – like the 65 in the All-Ireland semi-final. Maybe managers could have three chances to challenge decisions made in matches.”

McGill stresses however that just because there are currently no plans to introduce video review technology, it doesn’t mean the GAA aren’t keeping an open mind.

“It doesn’t mean that we’re not monitoring what’s happening in other sports but I have to say that we’re a long way off it in the GAA and I’m not convinced it will ever happen. “We’re not opposed in principle but we have principled concerns that it would slow the game down too much and I don’t think we’re seeing anything in other sports that makes us think, ‘hey, we must get that’ – in fact the opposite is the case.”

As a former referee, Murphy says any assistance would be welcome and that he would have had no problem working with video review.

“Referees want to get the decision right. If technology can help, that’s a benefit. But Gaelic games aren’t stop-start and the effect of that also would have to be taken into account. We want to get it right as often as possible but human error is always going to be there.”