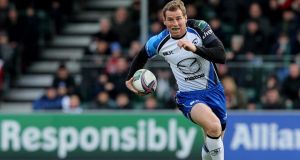 Gavin Duffy in action for Connacht. “He’s a powerful guy and a powerful runner. If you look at Gaelic football now, power and athleticism are big parts of the game” says James Horan. Photograph: James Crombie/Inpho.

When Gavin Duffy made the leap from the cradle of Mayo football to the bold world of professional rugby, people resigned themselves to wondering what might have been.

As the Ballina man established himself as a dependable and versatile fullback and centre in both the English Premier and Celtic leagues, it seemed as if his days wearing green and red would be confined to his minor scrap book. He was part of the 1999 minor team that lost that year’s All-Ireland final to Down. Then, he was gone.

But the surprising decision by Connacht Rugby not to renew Duffy’s contract for next season has led to the sudden resumption of his Gaelic football career at the age of 32. And Mayo manager James Horan clearly doesn’t regard his presence at training as a novelty.

“Full back, centre-half back, midfield . . .” he laughed, when asked where Duffy could operate as a senior Mayo footballer.

“We’ve played him wing back, midfield, half forward . . . around that area. And look, that could change, but that’s where I’d initially be looking from five to 12. He’s a powerful guy and a powerful runner. If you look at Gaelic football now, power and athleticism are big parts of the game in a number of different positions.”

It is a fascinating prospect. Duffy is remembered as an uncommonly talented Gaelic footballer. But stepping back into a sport that has evolved radically in the 14 years since does not seem that simple.

Shane Horgan, Duffy’s former international team-mate, was both incredulous and, by his own admission, jealous of what Duffy is attempting during a recent Second Captains conversation. On the Matt Cooper show, Senan Connell flatly rejected the idea that Duffy could take up the game again at the highest level.

James Horan has been typically relaxed about the development so far, pointing out that having an athlete and ball player of Duffy’s commitment and intensity in the dressing room can only help. But during Tuesday evening’s press night in Castlebar, he tantalised the Mayo public with the idea that this particular prodigal son has returned for real.

“He’s training hard. Obviously his skill set is a bit off where it needs to be. When you’ve a guy as dedicated, with the application he has and you give him the resources that he needs on a daily basis he’ll accelerate very quickly. We’re just very excited about where he is and how it’s progressing.

“I’ve said it before that if there is anyone who can add anything to the panel or improve what we do or how we play, I’ll certainly have a look at him. Gavin Duffy fitted a huge amount of those categories. It was a very low-risk move on our part and there was only benefit in it.”

Duffy made little secret of the fact that he remained a Mayo football fan throughout his years playing elite rugby. He kept in touch with former team -mates and, Horan said, often sent good luck text messages to players prior to championship games.

“I think he said in a few articles down through the years that he’d love a crack at it and if the chance came he’d bite the hand off you.”

The notion that a rugby player could just waltz into one of the top three Gaelic football panels in the game and claim an active role might be greeted somewhat sniffily by the football cognoscenti – and with probable glee by the hurling snobs. But Duffy is no ordinary case and the game has evolved in such a way that his strengths – ball carrying, covering, tactical awareness, physical strength – could be used effectively.

Nobody is expecting Duffy to morph into the new Ciarán McDonald. But Horan is obviously fascinated by the detail required to reinvent Duffy as a Gaelic footballer.

“We looked at it from a sports science background. They’re both evasion sports. The sports scientists will tell you the skill pack is similar and there is quite a high transference, particularly from his position in rugby to Gaelic football. There is a bit of rewiring to be done for sure, but we’d be confident that process can happen.

“And his kicking is actually very good. That is one area where you would imagine he would struggle. But he has been strong. He’s training daily to try and catch up. If you are kicking a couple of hundred balls a day your technique and timing will improve quickly.”

The claim that Gaelic football training has “gone professional” is old hat now but this is a rare instance where a full- time, seasoned, professional sportsman has joined the ranks of Ireland’s elite amateurs. The trade cuts both ways. Duffy is, Horan testifies, in serious physical shape. But Gaelic football has become a game of such sharp, short speed bursts that Duffy is working through a change in the kind of fitness required.

“The main one is the aerobic capacity and the repeatability of the run that Gaelic football has. It’s frightening the level that the Lee Keegans and Donal Vaughans, these guys, the number of high-paced runs they can do in a short space of time.

“If you look at rugby there’s a huge amount of set plays in rugby and there might be a sprint, followed by a scrum or a set piece, where you get your break in play. Whereas a Gaelic football match can go five, six or seven minutes without a break. That’s definitely the standout from a fitness point of view.

“From a skill point of view he’s working hard on his hand passing . . . the little pop pass is not allowed yet in GAA. Simple things like that can be the most difficult things.”

There would be an element of grand romance if Duffy’s return from professional sport could give Mayo the final push it needs to win in September.

Horan is a long way from thinking about All-Irelands but grinned mischievously when it was put to him that June 8th in Roscommon would surely be too soon for the former rugby star to make a senior debut.

“Oh, I wouldn’t rule anyone out of anything at this stage.”