Fitzgibbon Cup: DCU and UCC ease their way to semi-finals

NUIG and Mary Immaculate College will make up final four 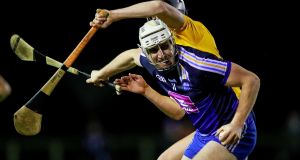 DCU overcame city rivals DIT on a scoreline of 2-19 to 0-12 to advance to the semi-finals of the 2019 Fitzgibbon Cup.

DCU had a great start to the game when Seán Morrissey found the net after Damien Reck’s initial effort was saved to give his side a 1-3 to 0-1 advantage. They pushed on before the break and the hosts held a 1-8 to 0-6 lead at half-time.

The game was effectively ended as a contest when Donal Burke added a goal after the interval. DCU excelled in the second half and Fionntan McGibb’s effort turned out to be the final score of the game as his side cruised to a 13-point victory.

UCC also advanced to the last four after victory over IT Carlow, as the Cork college claimed a 3-19 to 1-11 win at The Mardyke.

Mark Kehoe was excellent for the hosts with the Tipperary native scoring 2-3 over the duration of the match.

UCC held a narrow 1-8 to 0-8 lead at half-time before pushing on for a 14-point victory after an excellent second-half performance.

NUI Galway defeated LIT 1-15 to 2-10 on Thursday afternoon in Limerick, while Mary Immaculate College complete the semi-final line-up, after they claimed a 2-20 to 0-12 victory over CIT.

NUIG will face Mary Immaculate College in the semi-finals, while UCC will take on DCU.