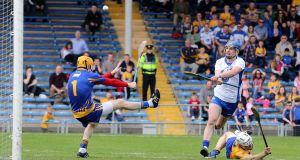 One largely unremarked aspect of Clare’s thrilling league final win over Waterford in Thurles is that 11 players became the first in the county’s history to have featured in both All-Ireland and league final success.

“In the championship you need the breaks. It’s different from the league,” said centre back and captain Seán Stack after lifting the retained league trophy in 1978 but the previous year they had seen full back Jim Power sent off in the Munster final against Cork. A year later the breaks were no kinder, as Clare lost again to the same opposition having held the deficit to two against a strong wind in the first half.

When Clare won the All-Ireland for the first time in 1914, the league didn’t exist and when Loughnane’s team won twice in 1995 and ‘97, they lost the league final in 1995 and didn’t qualify two years later.

Having bridged the 38-year gap on Sunday, one of the 11 players referred to above, goalkeeper Patrick Kelly said that the missing medals from two decades ago had been a motivation for his predecessor in goal and current manager David Fitzgerald.

“It’s too long. The guys from the 90s, they failed to win a league,” said Kelly “That’s what Fitzy always goes on about. That’s the one regret most of that group have. There is probably two or three medals worth winning at adult level - definitely the league is a badge of honour as Donal Óg says. It’s definitely worth winning it.”

Cusack, the three-times All-Ireland winning former Cork goalkeeper and coach with Clare missed out on a league medal in his own playing days, having come into the team the year after Cork last won the title in 1998 with current Dublin manger Ger Cunningham in goal. His final match for the county was in the 2012 league final against Kilkenny when an Achilles tendon injury ended his career.

Kelly said that the final wouldn’t have any relevance to next month’s championship match between the counties.

“Not really. At the start of the year, we targeted the Limerick game and June 5th, but we’ll take this. Anyone would take this. Back with the clubs this week, train hard and then wind down for the Waterford game. That’s a massive day.”