Damien Comer: ‘Dublin are beatable, we can win All-Ireland’ 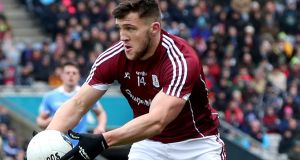 Given the immediate task at hand it might sound premature for Damien Comer to be talking about beating Dublin. Let alone winning the All-Ireland. This is though a well-timed view of Galway’s football season to date.

In town to collect to his PwC GAA/GPA footballer of the month award for April, Comer played a leading role in Galway’s run to the Allianz Football League final. In coming close to beating Dublin that day, it’s no wonder that game is still fresh in his mind, even though all thoughts have now shifted to Galway’s Connacht football opener against Mayo in Castlebar, on May 13th.

It’s one thing drawing with the All-Ireland champions in Salthill, it’s another thing playing them in Croke Park in a national final. But despite some well-aired fears, Galway held their own, losing in the end by four points.

If anything, says Comer, Galway may have given Dublin too much respect, because he certainly believes they are beatable.

“Coming into the game a lot of people, maybe including ourselves, would have been wary of it, because Dublin have given trimmings to big teams on league final day,” he says.

“We knew if we stuck to our processes and system we’d be well capable of taking them. We did for a lot of that game but didn’t push on when we needed to at the end and it was unfortunate. But it was a great learning curve.

“I don’t know if it was a lack of belief. You often see when a team goes down to 14 men [Dublin had Niall Scully sent off in the 50th minute], it pushes them on, and can benefit them in a way. I don’t know is it hunger, or they feel they have to try harder. So I think it was more that than a lack of belief.”

Has that heightened Comer’s belief that Dublin are beatable?

“There’s no doubt they are a formidable side, but they are there to be beaten. Monaghan beat them the week before, we drew with them in Pearse Stadium, and we probably had chances to beat them in Croker as well, so they are there for the taking. But you can’t stand back and admire them. They are a great team and if you stand back and admire them they’ll show you how good they are. But if you can go at them and go toe to toe then you have every chance of taking them.”

While not agreeing Galway may have played too defensively, Comer agrees that beating Dublin is ultimately a mental and physical challenge.

“If you’re not physically up to it, not willing to make the early tackles, it will come against you. But the mindset too, if you don’t believe you can beat them, and go in with a false mindset of trying to get close to them, or keep them within six or eight points, it’s a waste of time. You are as well to lose by 20 points as losing by two or three, so it is a bit of both.”

Comer puts his excellent form this season down to one thing – being injury free. Galway’s form, he says, has also been good enough to suggest they can win the All-Ireland.

“I think we can win an All-Ireland. Honestly, I wouldn’t be playing football if I didn’t think we could win an All-Ireland. I think the form that we’ve shown in the league can prove that, that we can go the distance with the big teams. That’s obviously the aim. Whether it happens this year... if it doesn’t happen this year, we’re going to go for it again next year. Hopefully we’ll have an All-Ireland by the end of my playing career anyway.

“During the league, our focus was performing consistently every day against whoever we’re playing, and I think last year, even for the last couple of years, that’s been a problem. All our performances [this year] were consistent, each of them led to the result that we got. I don’t think we were lucky to get a result in any game.”

And his last word on May 13th: “Look it, it’s going to be a really tough battle in Castlebar, we’re not expecting anything different, but we’re looking forward to it all the same.”