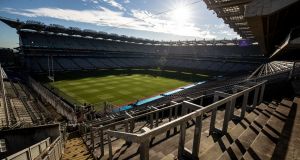 Croke Park Stadium providing a €10.5 million dividend for 2019 for the GAA, an increase of 33 per cent on the previous year. Photograph: Bryan Keane/Inpho

Although GAA Finance Director Ger Mulryan was careful to use the code words for what was record income for the association – “stable and sound financial position” – it was clear that after a decline the previous year, finances were back on track.

Turnover between the Central Council figures and those for the Croke Park holding company was at €118 million, 11 per cent ahead of 2018. The former set of accounts, essentially what is taken in by the central administration in gate receipts and commercial earnings – described as “the GAA arm” – was at a new high of €73.9 million, up 16 per cent on the previous year.

Mulryan was also at pains to highlight the part played by the Croke Stadium in providing a €10.5 million dividend for the year, an increase of 33 per cent. This is the highest such payment since the days when rugby and soccer internationals were played at the venue a decade ago.

It underlines the value of the stadium to the GAA. Cumulatively, the dividends stand at €117.5 million since they started to flow in 2006.

A number of influences have to be taken into account when looking at the income. There were ticket price rises last year plus an All-Ireland final replay in football, which took in €3 million as well as a number of concerts. Although the decade past featured between football and hurling, five drawn All-Irelands, the historical incidence isn’t as high.

Although the price increases helped to boost revenues, attendances were also improved with the championship average up by 2,000 to 19,000.

Mulryan consequently cautioned that emulating the financial results of 2019 would be a challenge.

The GAA aims to redistribute 80 per cent of its central revenues to the rest of the association and this year’s figures show that this target has been exceeded with 84 cent in the euro going back to the units after administrative costs – up from 83 cent the previous year.

There will be no Croke Park concerts this year. Stadium director Peter McKenna explained that with soccer’s Euro 2020 being played across 12 cities, stadium bands have been disinclined to arrange tours.

Last summer saw appearances by Westlife and The Spice Girls at the stadium. It will be the first time since 2013 that no concerts have been played at the venue.

McKenna said that the GAA’s turf farm in Naul, north county Dublin, was already in production and had been used to replace a part of the pitch after the Westlife concerts.

Asked was it supplying other venues on a commercial basis, McKenna said that at the moment the farm was being used for purely GAA purposes but that it had already delivered benefits.

“The fact is it gives us the security that we don’t have to rely on the transport of pitch over such a long distance. One of the real advantages too is that because it grows so close to where Croke Park is, the colour of the grass, the depth of the roots, everything is very similar to what we have already in situ so it knits together far quicker than when you are importing it. And of course Brexit happened so it insulates us in several ways.”

The Clonliffe project – for pitches, a hotel and housing development – on lands acquired from the archdiocese of Dublin, continues to progress, as outlined by McKenna, who projected that allowing for objections:

“It’s probably going to take a year of planning and then the pitches will go down in three or four months. They will be 4G pitches. The hotel will take 18 months to build from when we get receipt of planning permission.”