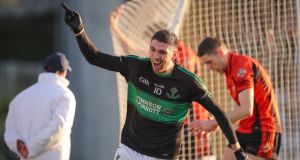 Nemo Rangers came of age by winning their 21st Cork football title despite scoring only two points in the second half at Páirc Uí Rinn on Sunday.

They seemed to have the game wrapped up by half-time, turning around 2-6 to 0-2 in front and in total control,

Luke Connolly claimed both goals in a devastating 30-second burst. The first came after 22 minutes, when Stephen Cronin played him in for an expert finish.

Nemo won the kick-out and Connolly scored at the second time of asking after his initial effort rebounded from goalkeeper Patrick Doyle.

And when Connolly added a free just before the break it meant Nemo had scored 2-4 without response.

Duhallow, though, fought bravely in the second half, restricting Nemo to just a Connolly free and a Paul Kerrigan point from play in the 40th minute, but the much needed goal never materialised.

Goalkeeper Micheál Aodh Martin turned an Anthony O’Connor piledriver over and then denied Daniel O’Connell late on as the divisional side paid for a poor first half.

Prolific Lewandowski still at the height of his powers 21:01
Weekend Premier League team news 19:53
Donnacha O’Brien gets off the mark with first training success 19:03
O’Leary calls for Cheltenham Champion Bumper to be restricted to amateur jockeys 18:00
Women’s rugby: Ireland make two changes for daunting England test 18:06
Here is your handy guide to sport on television this week