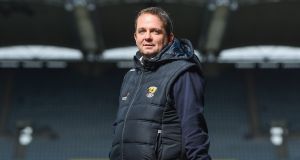 David Fitzgerald, now Wexford manager, at the launch of the Allianz League. People felt his reign in Clare had come to a natural end. Photograph: Seb Daly/Sportsfile

It’s now two decades since hurling’s ‘Revolution Years’, to borrow author Denis Walsh’s phrase, and what has cast the mid-90s into such stark relief has been the utter domination of Cork, Tipperary and Kilkenny since then.

The only team outside the ‘Big Three’ to have won an All-Ireland since Offaly’s win in 1998 start their league campaign against Cork on Saturday night and there’s no doubt that, for Clare, this year is a defining one.

The end of their association with Davy Fitzgerald, the man who in 2013 led them to their first All-Ireland title in 16 years, was always going to be contentious. In the end, it was about as bloodless a players’ putsch as we’ve seen, with Davy sensing the end long before the final blow was delivered.

And there is a palpable sense of relief in the county right now that Clare can look forward to a year of hurling without distractions. That’s not to say that there was a general ill-will towards Davy Fitzgerald and his methods, but people felt it had come to a natural end.

It puts one in mind of a formerly great player staying on a year too long and appearing uncomfortable to be relegated to the subs bench – it’s a problem while he’s there, but the second he retires, the plaudits come rolling in and he can walk away, head held high.

Davy’s successes are undoubted, and they will be put in their proper context with the benefit of cold detachment from the heated passions we’ve seen expressed during his tenure, both in support of and in opposition to him.

For better or worse, it sometimes appeared over the last four years that Clare featured in the national media more than Kilkenny almost, with a fraction of the on-field success. That never sat easily with people, and the hope is that this will change this season.

The league win last year came on the back of a good run in Division 1B, and that momentum took them all the way to a final win over Waterford after a replay, beating Tipperary and Kilkenny along the way.

Donal Óg Cusack had come on board earlier in the winter, so by the end of April it seemed like Clare had gotten a year’s worth of media coverage already, before the championship had even begun. That was not solely the fault of Davy Fitzgerald of course, but by the time the All-Ireland quarter-final came around against Galway, Clare couldn’t raise a gallop at all.

Other distractions were not of Davy Fitzgerald’s making – Podge Collins’ decision to play both football and hurling last year was commendable, but the player himself admitted last year that he ended up serving two masters less than successfully. It’s a crying shame, but he has dedicated himself to the hurlers alone this year, and could well feature on Saturday evening.

The ambitions for this year’s league are rather more modest. In fact, a no-frills, drama-free campaign of two wins and mid-table respectability over the next two months in Division 1A might be just what the doctor ordered for Clare. Staying under the radar and arriving at the Munster semi-final against Limerick on June 4th in Semple Stadium ready to rumble is the real aim.

That game needs to be the sole focus, because this Clare team’s record in the Munster championship is terrible.

Tony Kelly and Ballyea’s enthralling run to the All-Ireland club final on St Patrick’s Day will deprive co-managers Donal Maloney and Gerry O’Connor of their best player for the first few rounds of the league, but seeing him illuminate the winter in the way that he has done since October has been a reminder of the level of hurler Clare have at their disposal.

If Kelly offers a thrilling rebuke to the idea that size matters a lot more than it should in hurling currently, then as a team Clare have the chance to right a few wrongs too.

Another season of underachievement, even after switching to the off-the-cuff style that people have spent the last three years clamouring for, would lead to a lot of soul-searching. The best years of their hurling lives might still be ahead of them – but the next nine months has to go to plan.

1 Tour de France: Every yellow jersey winner must feel guilty by some association
2 Kevin Babington: Learning to live again after life changed forever on Long Island
3 Dundalk’s horizons widen ahead of clash with leaders Shamrock Rovers
4 Clifford brothers to the fore as East Kerry retain title
5 Matt Williams: The sky is not falling in on Irish rugby - but Ireland do need a new plan
Real news has value SUBSCRIBE