Ballyhale Shamrocks not intending to rest on their laurels 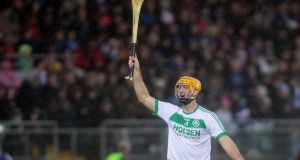 Colin Fennelly: Ballyhale forward will be aiming to help his club take another big step towards a second successive All-Ireland club title when they face Slaughtneil. Photograph: Laszlo Geczo/Inpho

There was nothing whatsoever subdued or contained about the way Ballyhale Shamrocks celebrated another AIB Leinster club hurling title on Sunday, only the slightly nagging feeling that it’s only another five weeks before they play an All-Ireland semi-final – that of course including Christmas and the New Year.

In the latest revision the GAA fixture list, those semi-finals, in football and hurling, taking place on January 4th/5th – the final then set for a fortnight later after being moved from its traditional St Patrick’s Day date.

After scoring the goal that ultimately opened the winning distance on Carlow opposition St Mullins, Ballyhale winning 1-21 to 0-15, forward Colin Fennelly reflected on what those next few weeks might be like, and whether or not there were more pros than cons as they prepare for that semi-final date against Slaughtneil, the Derry and Ulster champions, on the first weekend in January.

“It will make for a short Christmas,” he said.

“It probably even feels like you don’t even have a Christmas. It’s four weeks to the next game, really I don’t know. I’ve never experienced this before. Do you relax over Christmas?

“Henry [Shefflin] I’m sure will tell us to go out and have a few drinks, but once you’re out you’re thinking I’ve got an All-Ireland semi-final in another week or two. It’s very soon, it’s unusual, it’s strange, I’m sure they gave a theory behind it, I just don’t know what it is.

“But we’ll just have to put this behind us and look forward to an All-Ireland semi-final. And again it comes back to Henry, he’ll have us right, we focus on ourselves, on our team, and he keeps us motivated no matter what.”

Sunday’s win, Ballyhale’s 10th Leinster title in all and Fennelly’s sixth, also extended Shefflin’s unbeaten run since taking over as club manager two seasons ago. It also keeps them on course to defend their All-Ireland title, something Ballyhale have never managed before, when they resume duty early next month.

“It wouldn’t really be on our minds, but looking back, it was just making excuses, really, that we are tired. With Henry though, to be fair, he is doing a fabulous job.”

One definite pro to the early January date is that half back Richie Reid, on peacekeeping duty in the Lebanon, will be home for Christmas, and therefore available to play on that first weekend in January.

“It will be a huge boost having him back,” concluded experienced Kilkenny sharpshooter Fennelly.

Cahill pleased with Waterford’s character as they claim Rebels’ scalp