Camogie round-up: Mary Ryan hurls up a storm in Tipp’s win over Clare 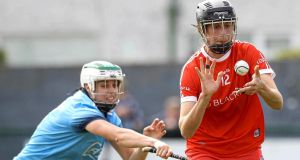 Cork’s Orla Cotter and Grainne Quinn of Dublin in action during their Camogie Championship Round 4 clash. Photograph: Lorraine O’Sullivan/Inpho

Fourteen years after making her debut for Tipperary, Mary Ryan is still one of the Premier countys’ prime performers, as illustrated by another tour de force that earned the pocket rocket player-of-the-match honours in her side’s 2-12 to 1-7 All-Ireland Senior Camogie Championship triumph over Clare in Sixmilebridge on Saturday.

Eibhlís McDonnell excelled with 2-2 from play for the victors, while Cáit Devane shot six points, but having started strongly in opening up a five-point gap, Tipp were actually on the back foot approaching the break.

They lost the influential Karen Kennedy to injury and a Chloe Morey goal from a penalty meant Clare trailed by just 1-5 to 1-4 at the change of ends.

Tipp appreciated the opportunity to recalibrate however and there was little doubt that they would make it a second win in a week once McDonnell netted for the second time.

Ryan, who just missed out on Tipp’s last All-Ireland success in 2004 and was part of the panel that endured defeat in the following season’s decider, hurled up a storm as Tipp ended the weekend in the third qualifying position, with games against Dublin and Meath still to come.

“We had a massive start, we tore ahead in the first 10 minutes but then we fell away and sat back and let Clare back into it” Ryan noted.

“They were always a threat up front so we had a good chat at half-time about pushing on. We knew we were putting pressure on when we took them on.

“At the start of the second half we took that on again and were lucky to get the other goal and I think that’s what helped us see it out in the end. For us, half-time probably came at a good time. With Karen going off, we were probably a little bit unorganised. We were aware of that ourselves when we went in and it was a case of kind of resetting and figuring out what was out.

“It is heavy going week after week but we just have to rest up during the week and push on again.”

Waterford kept their hopes of qualification very much alive when accounting for Meath in Páirc Táilteann by 5-9 to 0-11, a result that puts them level with Tipperary but holding the coveted second place due to a far superior score difference.

Beth Carton hit 2-3 and Niamh Rockett 1-3, while Annie Fitzgerald weighed in with a brace of goals and the returning Fiona Morrissey also impressed with a couple of nice points.

The damage was done in the first half, when Donal O’Rourke’s side recorded four of their goals, shared between Carton and Fitzgerald, and though Jane Dolan struck four points, and Aoife Minogue and Grace Coleman also found the target for Meath, the Royals found themselves 4-6 to 0-6 behind at the break.

The hosts were much more defensively solid after the resumption but Rockett was still able to find the net for the second week in a row.

All-Ireland champions Cork set their tendency for sluggish starts this summer aside with two goals in 17 minutes from Linda Collins and Amy O’Connor to record an impressive 2-20 to 0-9 victory over Dublin in Coolock.

The win leaves Cork sitting pretty on top of the table with three wins from three outings, while Dublin are still very much in contention for a knockout place in fourth, just ahead of Clare on score difference.