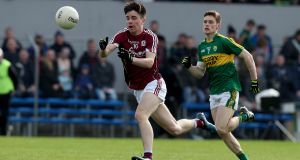 Seán Kelly got the decisive score as holders Galway got their FBD League campaign off to a winning start with a 1-12 to 0-11 win over Sligo.

It was a good workout as well for new Sligo manager Cathal Corey who gave a run to 10 debutants in the course of the match.

The goal by Kelly, one of four of last year’s under-21 side to start the game, helped the Tribesmen to lead by double scores – 1-7 to 0-5 – at the break having played with the wind in a game which was switched from Tourlestrane to the Connacht GAA Centre in Bekan, Mayo.

Galway used the wind well initially and opened up a 0-4 to 0-1 lead, largely through the free-taking of Peter Cooke, another of last year’s under-21 team to start.

Sligo kept in touch with the experienced Adrian Marren shooting two points from play along with a free, but both sides lost players to black cards with Galway debutant Seán Andy Ó Ceallaigh and Sligo’s Keelan Cawley dismissed in separate incidents.

Sligo rallied with the wind with Marren again their main threat but they never looked like getting the goal they needed to close the gap on a night when Galway United striker Pádraic Cunningham made his debut for the Tribesmen.

Meanwhile, Diarmuid Murtagh fired 1-7 as Roscommon inflicted a 2-14 to 1-3 defeat on Leitrim at the Annaduff Centre of Excellence.

Murtagh fired three points for the Connacht champions before Darren Carberry scored for Leitrim, but Finbar Cregg’s goal after 19 minutes and Murtagh’s in first-half added-time meant Kevin McStay’s side led 2-6 to 0-2 at the interval.