No refunds for fans at postponed Mayo and Galway clash 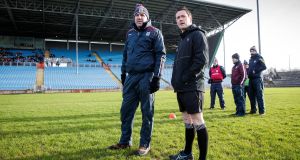 Galway Manager Kevin Walsh with referee Paddy Neilan before the postponement of the FBD Connacht League clash between Mayo and Galway in Castlebar. Photo: Ryan Byrne/Inpho

The FBD Connacht League match due to take place between Mayo and Galway in Castlebar on Sunday was called off after the scheduled throw-in time with the sizeable crowd already in MacHale Park.

A frozen pitch was the reason for the postponment with Connacht GAA then announcing that none of the estimated 2,000 people in the ground would be receive refunds for the €10 entrance fee they had paid in, all fans instead receiving a voucher to attend another FBD League match of their choice.

Speaking to The Irish Times, Connacht GAA chairman John Prenty said that this is a usual policy with postponed matches as it is difficult to give out refunds on the gate.

“Everybody that was there was given a ticket for any other game they want to go to in the FBD League. We didn’t just take the money and give them nothing back, we gave them a ticket. It’s a very difficult thing to do to give out refunds on the gate because you might have more money to give out than you’ve taken in. That’s our policy, we don’t [give out refunds] on the day anyway. It’s a very messy operation.”

Fans were also left disappointed with the timing of the decision. Connacht GAA tweeted the official announcement at 2.07pm with the news relayed over the PA system in the ground just moments before following the inspection carried out by referee Paddy Neilan alongside Mayo manager Stephen Rochford and Galway manager Kevin Walsh.

“It appears they gave it every chance with the high sun in the sky,” says Prenty. “Eventually they decided that it wasn’t improving sufficiently so they decided to call it off. Part of the problem in Castlebar is that you’ve got a big stand which stops the sun getting at the whole pitch. We’ll have to have a review in the morning but it’s unfortunate because it was a late call.”

Earlier on the other scheduled FBD League clash – between Leitrim and Sligo in Balinamore – had also been postponed but fans had not been allowed into the ground until a decision was made.

Prenty says it may have been wiser to make the same decision in Castlebar.

“The problem at this time of the year is that you have to play them in January,” said Prenty. “If you were to look at it again, in Balinamore that game was called off as well but we didn’t let anybody into the ground before it was called off so maybe we should have done the same in Castlebar.”

It has since been announced that the game will be played on Friday, January 12th at 7.30pm in Castlebar.

In the McKenna Cup, Armagh v Derry, Down v UUJ and Monaghan v Donegal also all fell victim to the frost while the Kehoe Cup clash between Longford and DCU St Pat’s was postponed as well.