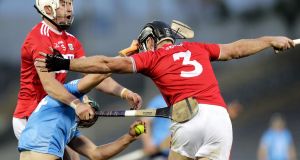 Cork resurrected their All-Ireland hurling championship ambitions as they led from pillar to post against Dublin in their first-round qualifier at Semple Stadium on Saturday evening.

Kieran Kingston’s side had five changes from their disappointing defeat to Waterford at the same venue a week previously and there was a noticeable improvement in their performance.

They amassed a six-point lead by half-time – the same advantage that would pertain at the end – but Dublin scored five of the last six points, with the game over as a contest.

Mark Coleman operated at centre-back for the Rebels and was a dominant presence while there was a greater democracy in attack, where there wasn’t as much of an over-reliance on Patrick Horgan. They led by 0-4 to 0-3 after a fine point from Robbie O’Flynn – who was suspended last week – and that advantage was stretched to four when Coleman found Jack O’Connor in space and he fed fellow full debutant Declan Dalton, who was able to finish to the net at the second time of asking.

While points from Cian Boland and Donal Burke had Dublin back to within three points by the water-break, Cork pushed clear as Horgan got his first two points of the game but in between they needed an important Seán O’Donoghue intervention to deny Eamon Dillon a goal opportunity.

Point from Ronan Hayes and Burke before and after the half-hour mark had Dublin back to within a goal again, 1-10 to 0-10, but Cork finished the half strongly. First, Séamus Harnedy and Tim O’Mahony linked to set up Shane Kingston for his third points, then O’Flynn made it three for him after a turnover and Horgan punished loose defensive play.

In the first minute of the second half, Burke had a chance of a Dublin goal but he was denied by a fine Anthony Nash save and, at the other end, Kingston’s fourth put Cork seven ahead. While Dublin tried to keep pace, with captain Chris Crummy scoring twice after his move to full-forward, overall Cork had the momentum and two points in quick succession from the impressive O’Flynn made it 1-17 to 0-13.

By the time of the water-break, Cork were 1-19 to 0-14 clear and Horgan’s frees, allied to points from Harnedy and O’Connor, left it 1-24 to 0-17 by the 62nd minute. They might have added a second goal but Alan Nolan saved from O’Connor and then Harnedy in the same passage of play but, while Dublin had late points from Burke and Crummy, Cork’s grip on the game was never in doubt.