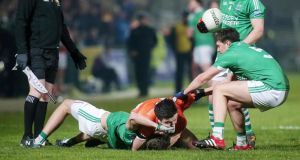 Tempers flare between the two side. Photo: Jonathan Porter/Inpho

They lived dangerously at times but somehow Armagh managed to hold on and pirate a last-gasp victory over Fermanagh in this dour, tempestuous Allianz League Division Two encounter at the Athletic Grounds on Saturday night.

A towering point from Stefan Campbell, his fifth of the game to go alongside a goal, in the dying embers of injury-time gave Kieran McGeeney’s a precious victory that could potentially help cement their bid to stay clear of relegation.

It was heartbreak for Fermanagh, but on the night Armagh’s raw courage and rugged staying power served them well.

Armagh looked sprightly and inventive in the early stages and they made a significant breakthrough in the 15th minute when Campbell pivoted smartly after taking delivery of a deft pass from the impressive Michael McKenna before drilling home a superb goal.

At 1-3 to 0-1 Armagh were looking comfortable and when Campbell swooped for his second point, their confidence was enhanced.

But Fermanagh struck two telling points in the 22nd and 24th minutes when the Corrigan brothers Tomas and Ruairi were on target, the latter’s score proving his team’s first from play. It was Pete McGrath’s side who finished the half strongly with Quigley and Paddy Reihill steering over points that left the home side clinging to a more slender lead (1-5 to 0-6).

In the third quarter Fermanagh exerted a greater degree of control and the home side were held scoreless for a 20-minute spell as Aidan Breen and Tomas Corrigan copper-fastened the visitors’ renaissance.

But the final 10 minutes saw the side’s trade points on three occasions before Campbell took a centre-stage role to hoist over his spectacular winner.

1 Gerry Thornley: Wild reactions to this Ireland team as fickle as the wind
2 Cheltenham keeping a watching brief on coronavirus
3 Five Golf Classics for you to tee up at in 2020
4 Dan Tuohy explains ‘rotten to the core’ comments
5 England and Eddie Jones at the vanguard of rugby’s hybrid era
Real news has value SUBSCRIBE