At the launch of the ‘Toughest Trade’, Mayo star makes case against new move 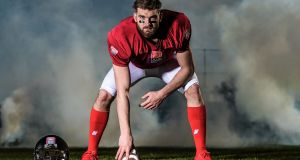 “There are a lot of similarities in some of the stuff from a strength and conditioning and preparation point of view. Things that jumped out of me compared to our own game is obviously the stop-start nature of the game, but [also] the complete and utter explosiveness of the game, and there’s no wasted energy.”

Mayo centrefielder Aidan O’Shea has expanded on his opposition to the introduction of the mark in football. He was speaking at a media briefing on his role in the AIB-commissioned Toughest Trade documentary, in which he swaps places with former Miami Dolphins American footballer Roberto Wallace.

O’Shea questioned whether the mark, introduced at last month’s GAA congress to encourage the skill of high catching, would achieve what its proponents had hoped.

“My opposition would be I think it’s unfair to make decision on the game in isolation. It might be a good idea, but where has anybody said, what’s the result of the mark? What could happen? What’s going to happen? Will it achieve what they want to first of all? I don’t think it will.

“I think it will actually take bigger players out of the game. I think there will be fewer bigger players on the pitch because Stephen Cluxton will kick the ball short and if he wants to get a mark he’ll kick it to a speedy wing forward – standard size, maybe about six-one, max – who is going to run into space and catch the ball. That’s not the idea.

“The way it was brought in was just wrong as well. You can’t just make a decision at Congress and people wave a flag and say, ‘Let’s bring that in, I think it’s a good idea.’ I just think it’s a big change to a game. I’m confident the game is in a good place. I just think we like to change things for the sake of changing them. Just play the game and stop giving out about it.

“It’s a real Gaelic football thing, not a hurling thing. When was the last time we changed a rule in hurling? If somebody said, ‘Jesus, let’s make the sliotar heavier because they are throwing the ball over from 80 yards,’ then people would scream – the hurlers would go mental.”

The Mayo All Star’s opposition had initially been flagged on social media, to the surprise of some given that he would be one of the players most associated with the ability to field high balls; during last year’s international rules Test in Croke Park he gave an exceptional display, although he says that he didn’t exploit the mark in the international game.

“Well, I stupidly kept running with the ball. I kept forgetting I had a mark. The difference I’d say in the international rules is in our game – we like to spoil a lot more, whereas in the International Rules, you’ll find the Aussies, through arrogance or not, think they are going to out-catch you.

One innovation from the international series that O’Shea does favour is the introduction of a second referee.

“If you have a referee in a the vicinity, if you have a player coming out defensively, from our 45, and we are 70 or 80 yards away, the referee can’t see what’s going on if there’s a tackle going in on the other side [of the field]. If there’s a referee inside there he can make a call. It’s just a fresh pair of eyes.”

On Sunday Mayo lost a home match against Kerry in the league, leaving them in the relegation zone with two fixtures remaining. The panel was at the centre of controversy last autumn when players forced out the management duo of Pat Holmes and Noel Connelly after just one year.

New manager Stephen Rochford, who took Galway club Corofin to last year’s All-Ireland club title, has had a difficult first few months, as he tries to streamline his own playing system and also cope with injuries to key players. O’Shea feels that the transition is one of the factors in the disappointing season to date but he believes that the work is necessary.

“If we are losing games but learning the lessons that might be for the betterment of the team later in the year, then fair enough.

“We’ve had a lot of boys late back for a number of reasons [Castlebar are in this week’s All-Ireland club final]. We’ve tried out a few young bucks, which is great.

“It’s a fine balancing act trying to get it between making sure you stay up the league and trying out the few little things that new management try and implement.”

Atlantic crossing: How would GAA players get to grips with American football?

Although a number of footballers have signed for AFL clubs in the past 30 years, the crossover between American football and GAA has been negligible. The most famous example was the late Tom Furlong, from the well-known Offaly GAA family, who emigrated to the US and played on the New York team that won the 1967 football league, beating Galway in the final.

Furlong joined the New York Giants’ “taxi” (extended) squad before signing for the newly-founded Atlanta Falcons franchise in 1967. He had attracted interest as a kicker in the American game but a knee injury derailed his progress before a career could take off.

Aidan O’Shea believes that kickers in the Irish game could still make a name for themselves in gridiron.

“I do think that some of the boys in Gaelic football would – I’m not a free-taker in our game but the likes of [Bryan] Sheehan or [Michael] Murphy or Cillian [O’Connor], [Stephen] Cluxton.

“It’s literally just repetition of technique and I went out there thinking that they throw the ball back and you just run up and kick it, but it’s actually very, very technical. I probably didn’t appreciate that at the time – I do now. There’s definitely ability for some of our lads to be able to do it. I wouldn’t, no.”

He felt his stint in America had given him some ideas for football back home despite the lack of obvious similarities.

“There are a lot of similarities in some of the stuff from a strength and conditioning and preparation point of view. Things that jumped out of me compared to our own game is obviously the stop-start nature of the game, but [also] the complete and utter explosiveness of the game, and there’s no wasted energy.”

O’Shea trained in a preparation camp for one of the NFL combines or trials.

“I wasn’t with any particular team. I was in a prep camp getting ready for the combine.

“It was a regional combine for college kids that are trying to make it, basically the American dream, trying to get a contract ion the NFL. That was the Saturday and I was in prep camp in Carlsbad before that going through the stuff I’d be doing at a combine and learning the routes.

“I got to throw with a quarterback prospect for the NFL draft this year, Travis Wilson, and a quarterback coach called coach Q. I had seen the drills to do with the combine so I had some knowledge of them.”

The Toughest Trade is on RTÉ Two tonight at 9.55pm