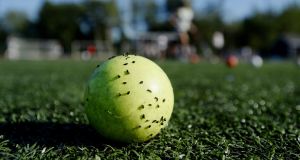 Recent Dutch findings will cause a new wave of concern over the extent to which rubber infill on synthetic pitches constitute a health hazard.

Scientists in the Netherlands have pushed back on European Commission findings of “low level” concerns regarding cancer causing material contained in crumb rubber.

The pulverised rubber infill is used in the construction of hundreds of synthetic pitches across Ireland and is also used for the ground padding in children’s play grounds.

The Dutch position is at odds with the European Chemicals Agency (ECHA) findings in March of last year that gave crumb rubber a clean bill of health.

“The concern for lifetime cancer risk is very low given the concentrations of PAHs (cancer causing agents called Poly Aromatic Hydrocarbons) typically measured in European sports grounds,” it said in a statement.

However, a recent proposal, prepared by the Dutch National Institute for Public Health and the Environment (RIVM), says that the general concentration limits set for eight carcinogenic PAHs in rubber mixtures are insufficient for protecting those who come into contact with the granules while playing at sports facilities and playgrounds.

In its assessment, the RIMV looked at the human health risk for professional football players (including goalkeepers), children playing on the pitches and on playgrounds, as well as workers installing and maintaining the pitches and playgrounds.

The proposal suggests a drastic reduction in the concentration of carcinogens contained in the rubber, which is largely made by the recycling of old car tyres.

The Netherlands say that a reduction in the known carcinogens would ensure the cancer risk from exposure would remain very low for children and young adults and would also decrease societal concerns about the negative health impacts caused by the chemicals.

Suspicion about the crumb rubber used in the surfaces initially arose when soccer players in the US reported a string of cancers – notably Hodgkin’s Lymphoma.

Amy Griffin, former World Cup winner and coach of the University of Washington women’s soccer team, was visiting a female goalkeeper in hospital, when a nurse informed her that the previous week four goalkeepers had attended for chemotherapy.

Griffin subsequently compiled a list of the 38 soccer players she knew who had been diagnosed with cancer, and 34 of them were goalkeepers. By December 2016, the list had reached 186 players, 116 of whom were goalkeepers.

Last November the Netherlands’ Ajax academy De Toekomst removed their 3G pitches after the findings of a documentary on the Dutch public broadcaster NPO revealed serious shortcomings in the government-sponsored research in 2006 that had declared the rubber crumb to be safe.

1 IRFU in line for €75m windfall as CVC acquire 14.5% Six Nations stake
2 Monica Seles: The warrior queen who could have been the best ever
3 Bryson DeChambeau motors home with 65 to win in Detroit
4 Enable can’t reel in impressive Ghaiyyath at Sandown
5 Six Nations planning second tournament in 2020 – reports
Real news has value SUBSCRIBE
Here is your handy guide to sport on television this week