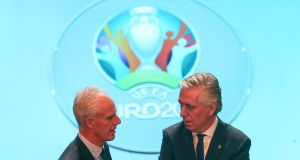 Leading the way: Republic of Ireland manager Mick McCarthy with FAI CEO John Delaney at the draw for the European Championships at the Convention Centre in Dublin. Photograph: Tommy Dickson/Inpho

“Hopefully you followed all of that,” Pedro Pinto said to the viewers at home and anyone who nodded was lying.

It would have been easier to comprehend what Jordan Pickford was up to in the 96th minute at Anfield than figure out how the Euro 2020 qualifying draw actually worked.

To further complicate it all the draw had ‘excessive travel restrictions’, ‘winter venue restrictions’ and ‘prohibited team clashes’, the latter condition keeping apart nations where relations are testy, eg Gibraltar and Spain, Bosnia and Kosovo, and Kosovo and Serbia.

There was, though, no prohibition on England playing any European nation with which it currently has a prickly relationship because that would have left them in a group on their own, taking the competitive edge off it.

Kevin Doyle tried to get his head around it all, but he was struggling.

“I’ve been studying it for the last week and it’s still hard to follow,” he confessed to Darragh Maloney, but the main thing was that we wanted to avoid a cataclysmic outcome like, say, us being put in the same group as the Netherlands and Germany.

And then Nuno Gomes pulled a ball from his bowl in the Dublin Convention Centre and attempted to put us in the same group as the Dutch and the Germans and Mick McCarthy wore the look of a man who was tempted to text Stephen Kenny (“Wud u like the job 2 yrs early?”), before Uefa competitions director Giorgio Marchetti and his computer intervened to save the day.

We couldn’t be in with the Dutch and Germans, after all, because like us and four fifths of Europe they are hosting some Euro 2020 games, so Giorgio very kindly shifted us in to a pot with Switzerland and Denmark. And we haven’t played the Danes in at least six weeks so that’ll be a nice change for us.

And then Giorgio announced that “the other Ireland” would go in with the Dutch and Germans and Michael O’Neill looked liked he was about to projectile vomit, before composing himself to produce his ‘we can beat anyone on the day’ face.

Our group was completed by Georgia and Gibraltar which made you think Uefa should introduce a restriction preventing teams sick of the sight of each other from ending up in the same pool. All we needed was Oman in there and it would have been deja-vu-arama.

“It could have been a lot worse,” said Richie Sadlier with the Dutch and the Germans, rather than Georgia (and Co), on his mind, while Kevin proclaimed himself to be “delighted . . . I think”.

But then when he went through our opponents team by team his confidence began to soar.

“We’ll go in to it all guns blazing, full of confidence hopefully and turn it around,” he said.

When Kevin sees a glass 50 per cent filled with liquid he actually sees it as 110 per cent.

“I’m probably being a bit harsh on Switzerland but I’m glad we got them,” he said. “And we’ve nothing to fear from Denmark if we get the bounce from the new manager.”

We have, of course, loads to fear from Denmark, and as their assistant manager Jon Dahl Tomasson said with a grin, when Tony O’Donoghue tried to put the fear of God in to him about the Return of Mick: “At the end of the day, it’s the same players who will be playing”. Debbie Downer.

There was, though, only sunshine in Montrose on Saturday night when Kellie Harrington arrived on the Ray Darcy Show with her world championship gold medal hanging around her neck.

Had it sunk in yet?

“On my way in to work this morning I was just sitting in the car driving along, I had the Christmas tunes on. It just started to dawn on me, I’m actually, like, the world champion. I’m world champion. Jesus, I’M WORLD CHAMPION.”

And Kellie had to beat New Zealand, India, Canada, Kazakhstan and Thailand, there were no prohibited team clashes, nor weather or travel restrictions.

If she could manage that, surely 11 of our hardiest lads can see off Switzerland, Denmark, Georgia and Gibraltar?