Crowd restrictions to be loosened today; Chelsea get underway with win at Brighton 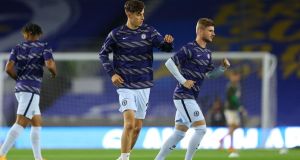 Restrictions on crowd numbers at sporting events are set to be loosened today when the government announces its medium-term plan Living With Covid-19. Malachy Clerkin reports that “for the first time since all sports went behind closed doors on August 18th, restrictions on crowd numbers will be loosened, with up to 500 people allowed into all venues and the possibility of 10 times that in major stadiums over the coming months.” If the measures come in for this weekend, county finals in Dublin, Tipperary and Monaghan will be the first to welcome spectators back since the opening rounds of their championships back in mid-summer.

Jorginho, Reece James and Kurt Zouma hit the net to hand Frank Lampard’s £200million Chelsea men victory at Brighton last night. New signings Kai Havertz and Timo Werner both started the match with the latter looking the liveliest part of an initially ponderous, increasingly fluent 3-1 win, while Brighton were both impressively slick and a little unlucky. Earlier Wolves sweep past Sheffield United thanks to a six minute blitz at Bramall Lane. In transfer news, Manchester United are preparing an opening offer for left back Sergio Reguilón but are unwilling to match Real Madrid’s €30m valuation.

1 More than 30 people queue overnight to secure property in Carlow
2 Coronavirus: Further 430 cases reported in State is most in a day since April
3 ‘To die of love’: The 1968 sex scandal that still fascinates France
4 Susie Dent: ‘Jimmy Carr is incredibly rude to me. I took it as a compliment’
5 My friends keep mocking my new boyfriend’s small penis
6 Gardaí appeal for information on rape of teenager in Co Mayo playground
7 Man with electric scooter who died in Meath was due to get married in the coming weeks
8 Michael Harding: ‘Do I know anything? Very f**king little’
9 Derry, Strabane and Donegal Covid-19 case rates lack ‘clear signal’
10 Tour de France: Every yellow jersey winner must feel guilty by some association
11 Tributes paid to musician killed by reversing van in Cork car park
12 ‘I’m frightened by people whose stupidity is putting my life at risk’
13 Two turnkey homes for sale on same street as owners leave Dublin
14 Neven Maguire’s Midweek Meals: Quick and easy meals for the family
15 The Books Quiz: Who wrote The Naked Lunch?
16 TV guide: 23 of the best shows to watch this week
17 Remains of Moldovan who died in N7 crash to be repatriated
18 49 and out for Corofin as their long Galway reign is ended
19 Border roads noticeably quiet after Donegal goes to Level 3
20 In this strangest of recessions, what happens next for Ireland?
21 More than 100 people gather in Co Donegal for anti-Covid-19 restrictions rally
22 Covid test in use at Rome, Frankfurt, Dusseldorf airports being piloted in Roscommon
23 People leaving Catholic church because they are tired of ‘little old men’ - McAleese
24 Bill & Ted in middle age: ‘We felt if we did it with heart, it would work’
25 Five top tips for a perfect kitchen refurb
26 Harry Crosbie puts family haulage business into liquidation after port dispute
27 Traffic volumes show Donegal locking down to greater extent than Dublin
28 Trump selects Amy Coney Barrett for supreme court
29 Klopp satisfied with Liverpool’s central defensive options for Arsenal visit
30 Brendan Gleeson as Donald Trump: ‘A mediocre impression and possibly a great performance’
31 Hundreds of thousands in China given ‘emergency’ Covid-19 vaccine
32 House fire in north Dublin causes substantial damage
33 Sixteen killed as fighting erupts between Azerbaijan and Armenia
34 Chris Johns: Boohoo exposed on pay and conditions in digital economy
35 ‘The arts in Ireland are a luxury – in Germany they’re a necessity’
36 David McWilliams: The better the economy does, the more Covid-19 spreads
37 Blackrock and Mulhuddart: How Covid-19 affected two Dublin suburbs
38 Vintage Ballymun Kickhams display decides Dublin football final
39 Political focus shifts as Government desperately tries to avoid new lockdown
40 State aid looms as key sticking point in week crucial to Brexit outcome
Real news has value SUBSCRIBE