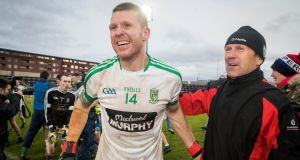 “Are you watching this?” read the first text. A second text came shortly afterwards – “Wow”. This from a man who wouldn’t usually make GAA Beo on TG4 a central plank of his Sunday afternoon.

As it happened, I had been watching, and I had been thoroughly wowed by Moorefield’s last-minute heroics against St Loman’s of Westmeath to win the Leinster senior club final.

But here we were, in the middle of December, still being surprised by the GAA. And it was a quintessential GAA experience on Sunday afternoon, right down to the scorer of the goal that kickstarted a most extraordinary injury-time revival – a 37-year-old veteran, a man who played in the Leinster senior championship final in 2000 for Kildare against Dublin, a day when Dublin’s mental frailties were ruthlessly exposed (tell your kids, this used to happen once upon a time).

Ronan Sweeney is a classic example of a former inter-county footballer giving perhaps not his best days, but his last days to his club, and getting an extravagant reward for it. In your wildest dreams you don’t imagine days like last Sunday – Moorefield scoring 1-3 in injury time, to turn a five-point deficit into a glorious one-point win.

His performance all through was something you’ve seen a thousand times if you’ve seen any more than a thousand club games. He was the “old stager” wandering around the field, being in the right place at the right time, leaning on years of experience, being effective in everything he did.

Instead of bemoaning what the body can no longer do, the old stager instead takes pleasure in contributing in any way that he can, by just being smarter than everyone else.

He alternated between full forward and midfield, but really he just went where he felt he was needed. And when he was needed with a minute of injury time already played, he stepped up and scored the goal, and then hung around close enough to the danger zone to fist the ball down for Kevin Murnaghan to kick the winning point.

A selector with Cian O’Neill’s Kildare management team, Sweeney only started his first game all year against Portlaoise in the Leinster club championship – perhaps wisely taking himself out of the firing line of disgruntled club players who might have fancied taking a piece out of him.

There was a special sense of joy to his celebrations afterwards, a sense that this was a day that he had longed for, of course, but with no real expectation that it had to happen for him.

He was there when they won the Leinster club championship in 2006, which was their first ever title, and only the second time a team from Kildare had won it. This was a beautiful, unexpected bonus. A grace note.

And looking at those celebrations, it was hard not to compare it to some other scenes we’ve seen at the final whistle in 2017. A delirious Colm Cooper turning to his manager Pat O’Shea on St Patrick’s Day when Dr Crokes finally made it to the promised land. Or Joe Canning standing with Tony Keady’s daughter as David Burke lifted the Liam MacCarthy Cup, a look of deep satisfaction on his face.

Then of course there was Jim Gavin’s much-commented-upon stoicism as Dublin won a truly classic All-Ireland football final by one solitary point. Or the middle-aged Roscommon fan shown on the television coverage, arms outstretched in exultation, leading the charge of hundreds of kids onto a rain-soaked Pearse Stadium pitch after their Connacht final win over Galway.

Cooper had won everything except that club title, and that one glaring absence seemed to burn a hole through him. Canning had gotten so used to being asked if he was going to let the absence of an All-Ireland title define him, that he had already seemed to make peace with his answer – before going and winning one anyway. And Jim Gavin was just being Jim Gavin, a businesslike, inscrutable man, who perhaps recognises that people not knowing what to make of you is a pretty useful tool as a coach.

We share in all these joys, swept away in it all when it’s our own team, like that Roscommon chap, or imagining what it would like to be there when our day eventually comes. So we all know what it was like for Ronan Sweeney last Sunday – we’ve all been there in our heads a thousand times, even if our day of days hasn’t come around just yet.

And as we march on into Christmas, and we lean on the GAA to lubricate some of our festive conversations – “Are you still playing away a bit yourself?”; “The hurlers were great, weren’t they?” – we can look ahead and say that 2018 might well be our year . . . and if it’s not, well surely it’s bringing us 12 months closer to our year.

1 Seán O’Brien: Anger over my parents’ break-up never left me
2 Connacht come out on top in nine-try clash with Edinburgh
3 Limerick score 36 points to overpower Tony Kelly’s solo act
4 Ireland 50 Italy 17: Ireland player ratings
5 Dan Martin back to third in Vuelta after a wet and wild Stage 6
Real news has value SUBSCRIBE
Here is your handy guide to sport on television this week