Why don’t we care about sport’s biggest sexual abuse scandal?

Case of Larry Nassar been partly ignored, the reason is because the victims were women 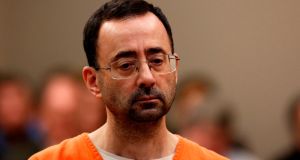 In a Michigan court last month, Larry Nassar pleaded guilty to seven counts of first-degree criminal sexual conduct. The longtime US women’s gymnastics team physician is accused of sexually abusing more than 140 women and girls, under the guise of medical treatment.

His accusers include some of the most prominent names in the sport, among them the Olympic gold medalists Gabby Douglas, McKayla Maroney and Aly Raisman and many others whom he treated over two decades at Michigan State University. When he is sentenced next month, the term will be added to the 60 years he was given last week in a separate case regarding child abuse images.

Culpability may only begin there. Many statements from victims and their attorneys have centered on the institutions that allegedly enabled or were negligent in preventing Nassar’s abuse for as long as two decades: Michigan State, USA Gymnastics and the United States Olympic Committee. All three are named as co-defendants in civil suits that appear headed to trial.

This is hardly the first high-profile sex abuse scandal in the sports world in recent years. No one can forget the Penn State assistant football coach Jerry Sandusky’s serial molestation of boys or Baylor University’s mishandling of rape allegations involving its football team.

Yet the case of Larry Nassar, certainly the largest such scandal in scale, has generated a fraction of the mainstream media coverage that was devoted to the Sandusky and Baylor stories. Why that is is worthy of inspection.

It is not as if reporters have not been paying attention. The Indianapolis Star broke the first allegations against Nassar in September 2016. The Lansing State Journal has been with the case every step of the way. Nationally, Dvora Meyers of Deadspin, America’s foremost gymnastics writer, has paired exhaustive reporting with thoughtful analysis. ESPN has hit on the major developments and the courtroom was packed with reporters when Nassar entered his plea.

So why the visibility issue? Perhaps it is because the story centres on a sport to which people do not pay attention during non-Olympic years. Or perhaps, unlike more common cases of sex abuse involving teachers or coaches, it is because the Nassar case involves the less familiar terrain of abuse by a doctor. Or perhaps it is simply a more complicated story than what happened at Penn State or Baylor, harder to parse or boil down to a digestible tagline.

But the most distressing reason of all is that the abuse of women is normalised in our society. The Nassar scandal fits into our framework of how we understand a sport like women’s gymnastics. On some level we expect women to be victimised, so it’s not surprising when they are. That’s a problem.

When a football coach is found to have molested boys, who are abused at a lower rate than girls (although at a much higher rate than we realise, due to underreporting), it goes against our expectations and shakes the foundation of a sport associated with virility and masculinity. Such news even stokes society’s latent homophobia. There is a shock associated with an older man molesting young boys that does not exist when the victim is a girl.

It is a subconscious form of erasure, which perhaps helps to explain why it took so long to thoroughly investigate the accusations around Nassar, some of which date back to 1997. Rachael Denhollander, a former club gymnast whose allegations were the first made public, in September 2016, said she hesitated to contact police for more than a decade and a half.

“I was 100 per cent confident that I would not be believed,” she said.

Journalism is a business. If people care about something, there will be more coverage of it. But stories like the gymnastics scandal, even if they do not involve glaring celebrity or a $14bn-a-year industry or more identifiable principals, are vitally important. They remind us how humans can be convinced anything is acceptable.

The manipulation here ran so deep that girls for years believed there was nothing to report. They assumed the adult was right, especially because he was an authority figure. In some of the cases the abuse happened while a parent was in the treatment room, a tragedy that offers an alarming metaphor of how blind we can be. It is literally happening in front of our eyes.

We should ask ourselves why the biggest sex abuse scandal in sports history has hardly made a dent in the public consciousness. But asking why there has not been more coverage is a self-indictment that misframes the issue and attempts to let the asker off the hook.

The issue isn’t the volume of coverage. The issue is people not caring. – Guardian service