Capital gains as Dublin round off season with All Stars night 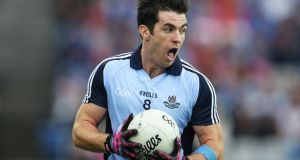 Dublin rounded off a memorable season in Croke Park on Friday night by taking six of the football All Stars at the GAA-GPA awards sponsored by Opel. The All-Ireland champions’ centrefielder Michael Dara Macauley from Ballyboden St Enda’s was named Footballer of the Year, the third time in the past four seasons that the county has claimed that honour.

Macauley played a major role in Dublin’s march to league and All-Ireland success this year, his athleticism and power breaking forward a feature of Jim Gavin’s team’s best displays.

He will be especially remembered for his tireless efforts in the memorable All-Ireland semi-final defeat of Kerry when he provided the assist for both of the injury-time goals that brought his team home in a remarkable conclusion to the championship’s best match - in particular his diving contact on what looked a lost ball to flick it away to Kevin McManamon who crowned a driving run by scoring the goal that sent Dublin conclusively into the lead.

In a further coup for the county, Jack McCaffrey was elected Young Footballer of the Year - the first time a Dublin player has been honoured in the category, won for tha past two years by Mayo’s Cillian O’Connor, who was again a candidate this year and championship top scorer despite his season having been so disrupted by injury.

Kelly is an outstanding hurler technically and moved between centrefield and centre forward during the season, winning his All Star in the middle. His shooting ability from distance was a major weapon for the David Fitzgerald’s team. Kelly scored in all of Clare’s seven matches, averaging just over three points a match for a total of 0-22.

Among the competition for the Young Hurler award was Kelly’s team-mate and fellow All Star Podge Collins, who also had an exceptional season.

All-Ireland runners-up Mayo were the next best represented county on the All Stars selection with four awards. The other two provincial champions Monaghan and Kerry got two each with Tyrone claiming one.

That the All Stars are based on individual displays can be seen in Dublin’s total of six at the end of a season they dominated - losing just once, to Tyrone in a regulation league match on the way to winning a league and All-Ireland double for the first time in 36 years - whereas two years ago they won the same total after losing the league final and coming late as underdogs to claim the Sam Maguire against Kerry.

This year’s defeat of the same opposition was the first time again since 1977 that Dublin registered successive championship wins against Kerry.

Stephen Cluxton wins his fifth All Star in goal, copper-fastening his status as the best ‘keeper in the modern game, from where his kick-outs have become such an important part of the team’s weaponry. Probably the most consistent player in recent times has been wing forward Paul Flynn, the only 2013 All Star honoured for the third successive season.

There is well deserved recognition for Rory O’Carroll at full back and Cian O’Sullivan in front of him at centre back. O’Sullivan played nearly all of the year at centrefield where he was an excellent foil for Macauley but was nominated in the half backs, where he had played a vital role against Kerry in the second half, fulfilling the requirement that a candidate must be “credible” in a position in which he’s selected.

Bernard Brogan picks up his third award after an at times difficult season, which he none the less finished strongly with four points from play in the semi-final and the Man of the Match award in the final having scored 2-3.

Of the Mayo contingent two, Keith Higgins and Lee Keegan - who both had outstanding seasons - were on last year’s selection whereas Colm Boyle, a model of consistency in the half-back line, and Aidan O’Shea, who gave one of the performances of the year in the defeat of reigning champions Donegal in the All-Ireland quarter-finals, were receiving their first award.

The doyen of this year’s team is Colm Cooper, winning his eighth award, who gave one of the great attacking displays in the first half of the All-Ireland semi-final against Dublin and at the other end of the scale his Kerry team-mate James O’Donoghue, was winning his first award for terrific displays in both the Dublin match and the Munster final defeat of Cork.

Behind Cooper, and with five awards, are Cluxton and Tyrone’s sole representative Seán Cavanagh, who is selected at left wing forward although like Cian O’Sullivan he played the vast majority of his football at centrefield. He remains one of the most accomplished footballers in the game and switches into the half forwards when required and averaged more than 0-4 a match during the championship.

Ulster champions Monaghan take two places. Colin Walshe was one of the defenders of the season, as his county won the Division Three league title and a first Ulster championship in 25 years. He also captained DIT to the Sigerson Cup in the spring.

His colleague Conor McManus made an equally significant contribution at the other end, averaging five points a match for a total of 0-20 and taking the fight to Tyrone in the All-Ireland quarter-final. He also ended the year with a massive top score in the second international rules test in Croke Park, racking up 24 points against Australia.