Callum Brown: ‘I think he called me a black b**tard, I don’t even like saying it’

Derry youngster on AFL, life in Sydney and how he's always stared down racism on the pitch 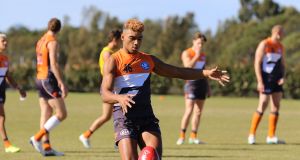 Callum Browne in action for Greater Western Sydney Giants in a challenge match against the Sydney Swans reserves at the Tom Wills Oval in Sydney. Photograph: Alison Zell/GWS Giants

After returning from a break in Ireland taken during the enforced AFL shutdown, Brown completed two long weeks of quarantine in a Melbourne hotel room, with only an Xbox, a laptop filled with game footage and an exercise bike for company. The agony of a lung-busting AFL cardio session is tempered by Brown’s happiness at being back with new friends and colleagues in Sydney’s winter sunshine.

“When I went home to Limavady I was delighted to get back and see everyone, but the fitness dropped a bit, and because I had no gym equipment available in the house, I managed to drop around 3kg of muscle. At home, I was running a lot and just doing push-ups for strength. It was hard, my Mum, sisters and friends kept saying you’ve got smaller, you’ve definitely lost muscle, and I was like please don’t mention it, I’ll get it back somehow.

“I’ve come back to Sydney and just put my head down, and I will hope for the best. I always wanted to be a professional footballer, in any code, and here I am in Australian Football.

“It’s taken me to one of the best cities in the world. Coaches ask me how I am, and honestly, there’s not much I can say. I’m in Sydney and playing AFL, I can’t complain. I love the lifestyle and am enjoying the game. I’ve also acclimatised to the heat completely, I find I am even getting a bit chilly at 19 degrees doing recovery at Bronte Beach, which is hilarious.”

Brown grew up in Limavady and thrived at every sport he tried. He represented Derry in both Gaelic football and soccer, playing in the elite Super Cup NI junior tournament. He was told he could make a strong centre in rugby and played a single game for Limavady Rugby Club, scoring a try within five minutes, before deciding at the final whistle that he would stick to GAA and soccer. Brown also played for Linfield’s under-17 team for a single season and has nothing but praise for the club.

“I had no problems whatsoever at Linfield. Family and friends from Derry were saying make sure you’re okay when I went there. People at home were worried about racism and sectarianism, but honestly, it was absolutely fine at the club.

“The people at Linfield were brilliant. They were completely supportive and super welcoming to me. When I joined, I’d get lads coming up from the club saying I can’t wait to play with you. The coaches were brilliant, and really understanding about me playing GAA. They understood the pressure in juggling both sports and whatever they could do to support me they did.”

Brown was grateful for the club’s support when he experienced a horrific racist incident playing in a local Belfast derby. Brown’s physical presence and athletic attributes have already helped him excel for the Giants’ reserve side in the North East AFL competition (NEAFL), ultimately earned him spiteful kicks and punches on Belfast’s muddy soccer fields. While Brown could stand the physical targeting to an extent, he recalls the racism he experienced from an opponent with a calmness that belies of the horror of the incident.

“I had to deal with racism playing for Linfield, only once against another Belfast team. I didn’t get along with the players. The opposition’s coaches were telling their team to smash me in the tackle. I was getting beaten up. Kicks and everything.

“It got that bad, our coaches were giving off to their coaches. There were a few scuffles during the game and I had never got along with this team even when playing for Limavady, so it was exactly the same when playing for Linfield.

“I was jostling with this guy and he tried to kick me in the back of the leg, so I turned around and looked at him. I think he called me a black bastard, I don’t even like saying it. I squared up, hit him with the shoulder, and he head-butted me. I just put him to the ground and pinned him and held him down. The parents were all giving off. The game had to stop. Players and coaches got banned after that game.”

Brown’s experiences of racism weren’t limited to the soccer field, he also experienced it playing Gaelic football in Derry. Brown decided to never react physically, regardless of the vile provocation he experienced from opponents on the field, preferring to treat the racism with the distain that it deserved and humiliate them on the field with his skill and strength.

“In Gaelic, I experienced racism three times. In my head, I just never take it on. I might scare the person doing it, but I would never react physically. You know they’ll not repeat it when you look them in the eye.

“Team-mates would always get around me and target the person being racist. My mindset has never been to react, and I’ve never reacted to anything like that. If I have a punch or a kick, I laugh it off. Ask anyone in Limavady and Derry who has played with me, I would just laugh at it.”

The Greater Western Sydney Giants are a club like no other in the AFL. Founded in 2009 – the Giants played their first full season in the AFL in 2012 – the club has created its own unique start-up sporting culture in an area of Sydney that is synonymous with rugby league and soccer.

Last year the Giants made their first appearance in the AFL Grand Final, losing to the Richmond Tigers, an unprecedented achievement for a new club. At the Giants, you will regularly see senior male and female players mingling easily, and club captains chewing the fat with the ground staff and cleaners. It is a club where everyone’s role is valued and Brown has slotted seamlessly into his new environment.

“The culture here at the Giants is incredible. It’s very family-based and they knew I loved that energy, as I am very close to my family at home. It does brighten up the situation of being far from home.

“I first came out in August 2018 to visit and I could just immediately see the energy in the place. No matter what job you have in the club, nobody is left out. Then when it comes to game day, and if you get a goal, everyone gets around you, there’s just a huge connection and bond. You get support off the field from fans and in the club and it just lifts you up.

“It’s been very easy to fit in. Everyone is included and everyone interacts with each other. The massive thing is nobody is left out. Coaches, staff, players, everyone is included. The leaders in the team take it upon themselves to instil energy throughout the club. You just have to smile. I really hope this doesn’t end, as it’s just been a privilege. This club was made for players like me.”

The AFL season has recently stuttered back to life with changes and compromises. There will be no NEAFL for this season and potentially beyond for the Giants’ second-string side with some state borders closed complicating logistics.

Brown will contend with a series of fixtures against the Sydney Swans reserves to strengthen his game, where he is developing as a key defender who can also play in the forward line when called upon. Like many of his Irish colleagues in the AFL, Brown’s biggest challenge is rewiring his soldered on motor skills developed from the GAA.

“The hardest thing is readapting your brain from Gaelic. Knowing when to go with the ball, and when to take the mark, although the coaches know I have the speed and they trust me. They’re working hard on that, and my bodywork around the play.

“I need to get a bit more accurate with my kicking of 10-30 metres. I know I have the speed and strength. If I know I have my man rattled, I know that I can compete. I have really come to love AFL. It is similar to Gaelic in many ways, and that brings back happy memories. It also helps me to focus on what I need to improve. It’s building the connection between the two.”

Brown’s ambition now is to not only debut in senior AFL for the Giants but to become a key player within the fledgling organisation. Given his mental and physical toughness, coupled with a unique sporting skillset honed in Belfast and Derry and sharpened in Sydney, it is hard to bet against him.

1 Seán Moran: It won’t take much before cancelling All-Ireland looks like a solution
2 Madigan’s primary goal is Ireland caps after switch to Ulster
3 My sporting disappointment: Battered, bloodied, broken by The Wall
4 Cyrus Christie recalls racial abuse from a child at Ireland training
5 View from Melbourne: Sporting fabric of the city suffering from second lockdown
Real news has value SUBSCRIBE
Here is your handy guide to sport on television this week