Brands seeking to ‘inspire’ women should start with their workers 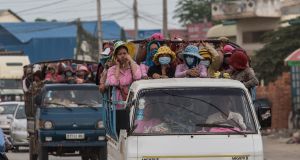 Workers on their way to the many garment factories in Phnom Penh, Cambodia. File photograph: Jason South/Fairfax Media/Getty Images

Women’s sportswear is having a moment with new clothing lines powered by inspirational quotes popping up everywhere. But behind the motivational slogans lie thousands of women in developing countries whose lives are far from empowered.

If sports brands are serious about supporting women, they should start with the women in their factories.

Asian countries are the go-to location for garment production; an estimated 80 to 85 per cent of workers in these garment factories are women. The companies filling our social media feeds with exhortations to dream big then turn around and pay their workers so little that paying the electricity bill is an impossible dream.

Just last year the Clean Clothes Campaign published a report Foul Play pointing out that only 2.5 per cent of the cost of your Nike or Adidas shoe goes to women on the production lines. That percentage drops every year. At the same time the report tells us the marketing budget for both companies has risen by about a fifth.

That budget includes marketing gimmicks such as the Dream Crazier video from Nike targeted at sports women and seen more than nine million times since February. The video tells women they’re seen as delusional for dreaming of equal opportunities to men, which is exactly what most garment workers must feel when looking at their lives.

Almost every sports brand you care to name has production lines in Asian factories including Nike, Puma, Asics, Adidas, Reebok, Under Armour and New Balance with varying levels of commitment to working conditions. Most factories produce for more than one brand under third-party contracts and the process is not as exclusive as consumers might think.

In just one week more than 300 workers at the Nike, Puma and Asics factories in Cambodia fainted while at work

The women making the sports gear typically work in factories on the outskirts of large cities. They stay in rows of concrete bungalows, each small room filled with a double bed shared by two or more women.

The bathroom is usually a row of toilets, with pipes and barrels of cold water for showering. Cooking facilities are non-existent (not unusual in Asia in any sector). Wires run along the rooms connecting shaky light-bulbs and powering sewing machines used by some women to earn more money in the evenings.

They rise at 6am or earlier to get breakfast along the street. Commuting is by motorbike taxi or standing together in the back of an open flatbed truck. Job security is rare with the majority of women on contacts of two to 12 months.

A Cambodian activist with the Workers’ Information Centre, supported by Irish NGO ActionAid, told me workers hide pregnancies because they’re let go when it shows. A United Nations report in 2015 found the abortion rate among garment workers in Cambodia is more than three times higher than in the general female population.

So you have women stitching progressive maternity sportswear who are afraid to become pregnant themselves.

If they do have children and take up a new position afterwards, the children are usually sent to live with their grandparents in a rural village. A Cambodian worker told me she sees her children – aged seven and 12 – twice a year.

After the tragedy at Rana Plaza in Bangladesh in 2013 when more than 1,000 garment workers died in a building collapse, many promises were made by clothing brands but only some have been fulfilled. In January, this year more than 7,000 workers there were fired for striking. Human Rights Watch have called on brands to take action in support of the workers.

In Vietnam, however, working conditions have been improved by limiting factory floor temperatures to 32 degrees. That’s important because stifling hot temperatures are not unusual in other countries.

In just one week in November 2017, more than 300 workers at the Nike, Puma and Asics factories in Cambodia fainted while at work. The brands acknowledged the problem at the time. But little has changed.

The Cambodian labour minister counted more than 2,000 fainting incidents across the whole garment industry there in 2018. They pointed to chemicals in textiles, exhaustion and badly ventilated factories as possible causes.

In some cases, women resort to a practice called coining where they scrape each other’s backs to draw blood believing this lowers body temperature. It’s somewhat like leeching but photos I saw, supplied by the Community Legal Education Center in Cambodia, left me nauseous as the women crouched next to sewing machines with blood flowing down their backs.

As consumers we do have power to change this. The workers rely on their income to survive, so a boycott is not the answer. But public pressure for change can go a long way.

It isn’t right to produce any type of clothing in these conditions. When sports companies target sportswomen and claim that wearing these clothes empowers women, we must ask questions.

How empowering is it for sportswomen to compete in clothing made by a mother who hasn’t seen her child for months? How empowering is your performance-enhancing moisture-wicking top if it was sewn by a woman who later fainted in a stifling factory?

Instead of sharing the next motivational video, ask the brand on their social media page how much they pay the women putting those cool outfits together. Ask how much maternity leave workers get and ask how long work contracts are.

This might all sound difficult but as sports brands will tell you; nothing is impossible.