Big freeze not such a big hit 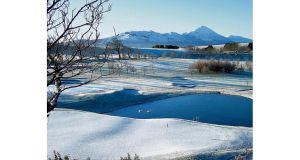 Westport's seventh green makes for an ideal picture postcard setting especially with the impressive backdrop of Croagh Patrick. However, the reality is very different for clubs, who have suffered a huge financial hit due to the recent arctic weather. - (Photograph courtesy of Westport GC)

AESTHETICALLY, IN a picture postcard sort of way, Ireland’s golf courses have resembled a winter wonderland throughout the big freeze; but the reality of the situation is the impact has extended to more than the mere fact that golf has all but closed down for the duration of the arctic cold spell: there has been a financial hit in an already tough economic climate for clubs and resorts to take.

In some far-off places, like Greenland, Austria and Switzerland, such inclement weather wouldn’t deter golfers as there’s such a sport as snow golf where, believe it or not, the greens are called whites. Indeed, the famed author, Rudyard Kipling – who lived in the snow-capped mountains of Vermont – is believed to have indulged in his passion for snow golf whenever his breaks from writing Jungle Book would allow it . . . but the impact of the weather on Irish courses these past few weeks have brought a different kind of chill, with many hit financially because of the closure of courses.

As Eamonn Logue, the director of golf at the Hilton Templepatrick outside Belfast, put it, “we’ve our hands around our throats”.

The Templepatrick has been closed for play since December 19th and, with a series of open days that were due to be played over the holiday period cancelled because of the conditions, the financial impact has been significant. “At a guesstimate, we’ve lost out £30,000 in revenue, it’s a massive hit . . . and everyone’s in the same boat,” he said.

Everywhere – north, south, east and west – there have been similar hits taken, on the chin mostly, by golf courses which have been forced to accept that it is simply not possible to remain open for play.

Denis Kane, the chief executive at Druids Glen resort, explained that their two courses – Druids Glen and Druids Heath – have been closed over the period, with the exception of New Year’s eve. “It’s always a bumper week between St Stephen’s Day and the New Year but, unfortunately, you have to take it the same as a restaurant booking or an airline seat, it’s gone forever. It’s the nature of the business and we have no control over the weather.”

The course at Portmarnock Links did better than most, opening for “three and a half days” over the period. “We’ve never been closed like this. In the past, with frost, you’d still have the course open by 11 (in the morning) . . . thankfully, something like this only happens every 20 years,” said Moira Cassidy, the director of golf, who hopes the rise in the weather temperatures will allow the links to reopen by next Thursday when the Links Society’s outing is scheduled to take place.

One result of the freeze is greenkeeping staff have been diverted to other tasks, many involved in maintenance work in overhauling machinery or, in the case of Fintan Brennan’s staff at Portmarnock Links, using the time to build new bunkers on the redesigned first hole.

In outlining the prolonged cold spell was “just one of those things”, Tralee’s secretary manager Anthony Byrne accepted there was “nothing you can do . . . some of the old codgers around here have never seen anything like it.”

The links in Tralee has been closed since before Christmas – opening for play only once, on New Year’s day, in the interim – and, with a blanket of snow covering the course yesterday, there’s no indication of when it will be able to reopen.

Even with the start of a thaw in many parts of the country, there won’t be any quick return to the fairways for the country’s golfers. As Templepatrick’s Logue explained, even when the snow dissipates, the ground is so frozen the melted snow has no place to drain.

Kane concurred. “You couldn’t let golfers out in conditions where the ground is frozen, it would be like hitting a ball off concrete,” he said.

In Westport, where a decision on the course’s playability has been taken on a daily basis throughout the period, “even though we know in our hearts and souls (it can’t be played)”, secretary manager Seán Durkan stated there were days when you would have to “ice skate over the car park” just to reach the clubhouse.

He pointed out that clubs were bound by health and safety considerations on making a decision on the course’s playability, pointing out that even with the thaw, greens were still frozen to a depth of “eight inches to 12 inches”.

So, when the thaw takes place around the country, golfers should be mindful that just because they can see green grass rather than snow, it doesn’t mean that the clubs can be whipped out of the car boot: it could take some time yet for the course to be ready for play.

So, it could be a while yet before the vast majority of courses are in a position to open up for play. As Tralee’s Byrne opined: “When you see the plight of the poor potato farmers who can’t get their crops out of the ground, it puts things in perspective. That’s their livelihood, we only have to have patience,” he said.

1 Ireland 23 Georgia 10: How the Irish players rated
2 Ireland grind their way to grisly win over Georgia
3 No fireworks but Limerick get the job done against Galway
4 Jim McGuinness: There is a way to save championship and make it competitive
5 Ireland’s autumn of discontent continues with abysmal Georgia showing
Real news has value SUBSCRIBE
Here is your handy guide to sport on television this week