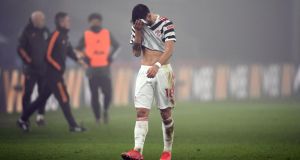 Manchester United played out a third-consecutive stalemate last night, as they were held to a goalless draw by Crystal Palace at Selhurst Park. Ole Gunnar Solskjaer’s side looked leggy and short of pace, creativity and drive with chances at a premium throughout in a foggy south London. United are now 14 points adrift of runaway Premier League leaders City ahead of Sunday’s Manchester derby at the Etihad. Earlier in the evening Leicester City also slipped up, Kelechi Iheanacho earning the Foxes a point in a 1-1 draw with Burnley at Turf Moor. Elsewhere Aston Villa were beaten 1-0 by basement side Sheffield United at Bramall Lane - Ireland’s David McGoldrick with a well taken winner in the first-half. Tonight Tottenham take on Fulham at Craven Cottage (6pm), Everton travel to West Brom (6pm), and Liverpool welcome Chelsea to Stamford Bridge (8.15pm).

In this morning’s Rugby Statistics column John O’Sullivan has looked at the impressive performances of Robbie Henshaw, who has been arguably Ireland’s standout player during the opening three rounds of the Six Nations. And he believes Henshaw’s midfield partnership with Garry Ringrose can provide the Irish backline with the creativity and stability needed to end the Championship on a high against Scotland and England. He writes: “Prior to the opening game of the tournament against Wales, the last time they started a Test match as a midfield pair was the 2019 World Cup quarter-final defeat to New Zealand. There is evidence that both are adopting a more hands-on role as distributors and decision makers. It will broaden the avenues of attack and reduce the onus on Sexton to provide the creative spark.”

2 TV guide: 22 of the best shows to watch this week, beginning tonight

6 No Irish howlers, but Prince Philip’s body language with McGuinness told a story

7 ‘I’m cheating on my husband with a married man – can we ever trust each other?’

11 Ireland’s Generation Rent: ‘After 12 years renting, I’d like my own front door’

14 How to build a modern man: Helping boys to grow up happy

15 Warmer weather to coincide with lifting of 5km travel restrictions

17 Aidan Turner: ‘That photograph. Yeah. It took away from the work’

18 Even better than the real thing: Escapist holidays in Ireland

21 Trust trumps Zoom for Terry Hyland and his Leitrim exiles

22 Fintan O’Toole: I got a mortgage at 24 – unthinkable for today’s young adults

23 David McWilliams: A female-led economy is coming – and it will be better

27 Coronavirus: 14 further deaths and 455 new cases reported in the State

30 Leadership at issue as Fianna Fáil eyes prospects after pandemic

32 US Masters: Hideki Matsuyama shines after the rain to take control

35 Alys Fowler on love and gardening: ‘Ursula Halligan inspired me to come out’

40 Cliff Taylor: There is a reckoning coming and big decisions lie ahead