Andy McGeady: Time on Cullen’s side but the time for Leinster might be now 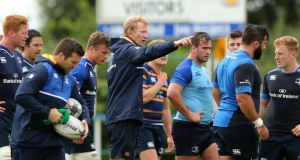 Leo Cullen has a sensible face. Elderly, almost. It’s always been like that. The prospective Leinster head coach is just one of those chaps of whom it’s hard to think of as being young.

At 37 he’s hardly embryonic; Tony McGahan was named Munster coach at 35 after all.

But most coaches at European club rugby’s top level are in their 40s, with the younger ones having more experience under their belts than the former Leinster secondrow.

While Grenoble’s Bernard Jackman is the only coach in the Top 14 or Aviva Premiership who has not yet celebrated his 40th birthday, if Cullen is named Leinster boss he wouldn’t even be the youngest head coach in the Pro 12 this coming season.

That honour would go to Ospreys’ Steve Tandy, all of 35 and in place since 2012. Toulon coach Bernard Laporte was 35 when he coached the French national team in the 2000 Six Nations. John Mitchell was 37 when he took the All Blacks job in 2001 – he’d started his club rugby coaching career early, taking charge at Sale while still playing.

For sports fans of a certain age the concept of the player-manager won’t seem so unusual. Kenny Dalglish did the job at Liverpool. Glen Hoddle at Swindon. Chelsea had Ruud Gullit, then Gianluca Vialli. Graeme Souness did it for Glasgow Rangers. And, further back, John Giles for club and country.

But in recent times when Garry Monk and Ryan Giggs both did the job on an interim basis those double-jobbing days seemed awfully far -off.

In the 1990s and 2000s Paul Turner, Mitchell, Francois Pienaar and Brendan Venter all had stints as player-coach at the top level of English club rugby while still playing.

Is it something that would be possible now?

“I’ve always said that I don’t think it would work in the professional era now, a player-coach” said Turner.

The Welsh fly half was player-coach at Sale for four seasons, followed by Mitchell, and would go on to work under another player-coach, Francois Pienaar, at Saracens. That Saracens outfit offered an early glimpse into rugby’s multinational future, signing players like Wallaby great Michael Lynagh (replaced by the Frenchman Alain Penaud), Philippe Sella and Pienaar.

“We were getting into the professional era then and that sort of proved to me that it didn’t quite work,” said Turner.

“There was the odd incident where Francois – and I felt this myself [as a player-coach] – was one minute trying to be a member of the team and then you’re having to dress players down individually. And I don’t think you can do that nowadays.”

Turner says if he had his time again he wouldn’t have done it. He didn’t think that the way Sale played was down to his coaching but rather because he was at fly-half, exerting influence from a key decision-making position on the field.

“I always said I’d never do it again – if I had my time again I wouldn’t be a player-coach because you put yourself under extra pressure; you’ve got to win every game.”

The pressures are both extra and different.

“I think player-coaching is kind of finished, because the game’s evolved in 20 years. There’s a lot more micro-coaching involved,” says Mitchell.

Now CEO of a manufacturing firm in South Africa, he does not view youth as an intrinsic disadvantage but says rugby can be too eager to push former players to the top.

“A coach is clearly a leader,” said Mitchell, but added that “leadership is different; leadership is the thoughtful application of that ability, and he only really knows what he knows at that time.”

Mitchell’s point is that a young coach can’t be blamed for his lack of experience, but they must be prepared to endure without losing confidence, becoming more thoughtful as that experience is gained. That’s if they’re still in the job.

Jackman, perhaps predictably, doesn’t view age as being a problem. Rather it depends on how mature the person is and “if he has a strong philosophy on how the team should play and prepare. Leo is very mature and won’t have any problem from that point of view.”

Word is that Cullen interviewed impressively for the post (has a candidate offered a coaching job ever been reported as having done otherwise?)

In some ways the Leinster job is very attractive; a familiar set-up with very good odds of playing European Cup rugby season after season backed by a budget, which, while not up to French standards, is considerable. And he might never be in a position to take the job again. But this coming season will be messy. The Rugby World Cup will ensure a heavy reliance on the fringe squad members well into the Autumn.

When it comes to raw experience, Cullen would be a risk. But Cullen, Jackman and even Steve Tandy are old men compared to Ucha Sosiashvili.

This season FC Dila Gori became Georgian football champions for the first time, and Sosiashvili was their manager.