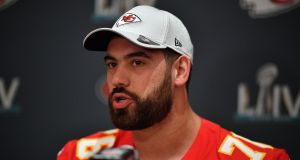 Super Bowl winner Laurent Duvernay-Tardif will sit out this season with the Kansas City Chiefs to work in the medical system in his native Canada. Photograph: Mark Brown/Getty Images

On the first Sunday in February, Laurent Duvernay-Tardif started at right guard on the Kansas City Chiefs team that won the Super Bowl. By April, he was donning scrubs and putting his medical degree to use on the front lines of the pandemic in his native Quebec.

Two weeks ago, he became the first NFL player to opt out of the forthcoming season using the league’s new Covid-19 clause, deciding to stay where he could contribute to the ongoing fight rather than return to his day job protecting Patrick Mahomes from marauding linebackers. Thirty-nine others across the league have, for different reasons, followed Duvernay-Tardif’s example since.

Last Sunday, Yoenis Cespedes didn’t turn up for the New York Mets’ game against the Atlanta Braves, an always eccentric character’s uniquely ham-fisted way of informing the club he was choosing to sit out the rest of the baseball campaign. After a troubling week during which umpteen Miami Marlins and St Louis Cardinals tested positive for the Coronavirus, Cespedes said concerns about his mother’s health problems influenced his decision. He became the 18th major leaguer to opt out, the third in just 24 hours.

To understand why a growing number of athletes are unwilling to play, and, in most cases, prepared to leave vast sums of money on the table, it’s necessary to tell the story of Eduardo Rodriguez. A 27-year-old pitcher with the Boston Red Sox, he contracted the virus before the Sox reported for training camp ahead of the start of this truncated season, and said that it left him feeling “100 years old”. After doctors initially gave him the all-clear, it was discovered he’d developed myocarditis as a result of his 10-day battle with Covid-19. He won’t pitch again until April.

The plight of Rodriguez serves as a reminder that doctors still don’t know the long-term consequences for those who are infected and manage to fight it off. Aside from the immediate danger of bringing the virus home to more vulnerable family members (some of those who’ve opted out have pregnant wives), men who make their living using their bodies are entitled to be afraid of the lingering physical damage this might cause and its potential impact on future earning power.

In a sport where most careers average just over three seasons and contracts are not guaranteed, nobody should be shocked that eight New England Patriots decided discretion is the better part of valour.

The NFL has a long, shameful history of wilfully neglecting the health and welfare of its players. How can an institution that lied about the impact of concussion for many years be trusted to tell the truth about Covid-19 now? After all, they’ve even introduced a stipulation paying those who opt out for pre-existing medical conditions a salary of $350,000 while those who sit down out of sheer common sense will receive less than half that sum in compensation.

Financial losses aside, there is bravery in choosing not to play because there remains a disturbingly large and vocal constituency of Americans who are skeptical of the entire pandemic. These anti-science numbskulls either regard the whole thing as some media-concocted conspiracy to defeat Donald Trump or believe it can be solved by popping Hydroxychloroquine, the discredited drug still constantly touted as a miracle cure by the president and his death cult.

The type of fans who believe mask-wearing is not only ineffectual but somehow effeminate are already calling for “opt-outs” to be banned from ever playing for their teams again. These troglodytes have long memories too and will no doubt be waiting to heap opprobrium on players who listened to sound medical advice and stayed home to spare their families instead of, literally, taking one for the team.

Whatever happens when (maybe if) the NFL returns next month, baseball, right now, is America in microcosm, a sport that tried to come back too soon with too few restrictions and not enough scientific input. When 17 Miami Marlins tested positive last week, investigations revealed the players were socialising in between games, hanging out at bars as if this was any other season. They refused to obey any strictures that impinged upon their lifestyle because their right to do what they want over-rides wider societal concerns about the spread of the virus. Like so many of their misguided compatriots, they lack the basic discipline to stay on the hard road. Meanwhile, the numbers of deaths and new infections skyrocket daily.

At least the Marlins, the Patriots, Cespedes et al have players’ unions fighting their corner in terms of health and safety. At collegiate level, there are no such protections. Right now, universities across America are forcing scholarship athletes to prepare for the forthcoming gridiron campaign, telling amateurs who generate millions for their schools that infections are inevitable and outbreaks will happen but they will just have to deal with it. Nothing must come in the way of so-called educational institutions turning a buck on the backs of desperate young men.

“Being at the front line during this offseason has given me a different perspective on this pandemic and the stress it puts on individuals and our healthcare system,” said Duvernay-Tardif of his decision not to return. “I cannot allow myself to potentially transmit the virus to our communities simply to play the sport I love.”

And he would know better than most.