America at Large: Morality in short supply at college where God and football rules 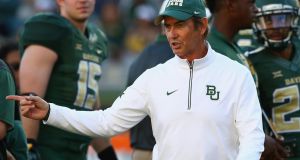 Art Briles during his time in charge of the Baylor Bears in Waco, Texas. Photograph: Ronald Martinez/Getty Images

Six years after taking over at Baylor University, Art Briles was earning $5 million a season, the inflated salary reflecting how he had transformed the Texan college into a national powerhouse and become one of the most coveted coaches in gridiron.

During that time, 19 of the players who made his reputation on the field were accused of sexually assaulting female students off it, including four cases of gang rape. In at least one of those instances, Briles received a full report about the incident but chose not to go to the police. Welcome to the corner of the sporting world where the moral compass points only towards the scoreboard.

After a Philadelphia law firm delivered a report into the litany of allegations surrounding the team back in May, Briles addressed the college’s board of regents about the scandal. At one point, as he struggled to explain how such a culture of rampant sexual violence was allowed to flourish in his locker room, he burst into tears.

Bizarrely, the sight of him crying caused some of those on the other side of the table, his supposed higher-ups, to well up too. Then, he quoted scripture, always a canny move in a college founded by the Texas Baptist Education Society in 1844, and a place that prides itself on remaining devoutly Christian in its ethos.

Briles stopped short of admitting any wrongdoing but, even after all the histrionics, was still suspended two days later. Ken Starr, the university president and the lawyer who first came to national prominence as chief prosecutor of the stained-dress impeachment case against Bill Clinton in the 1990s, then fell on his sword.

Any impression that justice might now be being served on campus was fleeting because what happened next offers a window into the skewed priorities of many around college football, especially in regions like West Texas where it traditionally inspires quasi-religious zealotry.

Baylor chose not to immediately terminate Briles's contract because so many alumni and, crucially, big-money donors, were aghast at the prospect of losing their most successful football coach ever. When they finally did cut ties, Briles embarked on a high-profile tour of NFL pre-season training camps, during which the Dallas Cowboys’ owner Jerry Jones was among those willing to testify about his bona fides.

By the time the college season kicked off in September, speculation was rife that the first serious contender to struggle would be willing to fire their head coach knowing such a blue-chip candidate was readily available for hire.

This remained the prevailing view until the Wall Street Journal re-opened the story last week. Through a series of interviews with the Baylor regents, the newspaper uncovered more lurid and damning details that came to light during the initial investigation but which were not included in the summarised report that was made available to the public.

The true scale of the offences (one lawyer described the campus as “a hunting ground for sexual predators”) and the stunning degree of complicity of those in charge is such that the belief now is Briles will never coach again.

“There was a cultural issue there that was putting winning football games above everything else, including our values,” said J Cary Gray, a lawyer and member of the Baylor Board of Regents. “We did not have a caring community when it came to these women who reported that they were assaulted. And that is not okay.”

Even in a depressing era pockmarked by steroids and scandals, college sport stands out for its obvious lack of basic moral decency. At Penn State, Joe Paterno didn’t bother to report a paedophile on his staff for decades yet is still revered by alumni perversely prizing his titles over the children molested by Jerry Sandusky.

Louisville’s basketball coach Rick Pitino is known as a control freak yet somehow claims he had no knowledge his assistant was using prostitutes and strippers to recruit teenage boys to bolster his team.

Boasting a code of conduct strictly prohibiting pre-marital sex and alcohol, the Baylor case is nauseating but it is also just part of a pattern running through too many institutions where athletes and coaches are held to different, much lower standards. That just three of the 19 Baylor players accused of sexual assault ever faced criminal charges epitomises the way in which this university, like so many others, appeared more concerned with protecting the brand than the victims.

In 2014, Patty Crawford arrived on campus as Title IX co-ordinator, charged with looking into complaints by women that sexual assaults were not being taken seriously. She later resigned, citing the fact the authorities regularly prevented her from doing her job. She told CBS Sports the other day that, in her opinion, the determination to pervert the course of justice started at the very top.

“During the 19th and 20th centuries, prestigious institutions of higher education founded on Christian principles began a relentless retreat from their spiritual heritage,” says the university manifesto.

“During that time and into the 21st century, Baylor has remained one of the few to persist in the belief that not only can its Baptist heritage inform a vital approach to life in general, it can also inform the life of the mind specifically. Baylor continues to hold firm to the conviction that the world needs a preeminent research university that is unambiguously Christian . . .”

With a very small c.