Ahead of the 2019 Irish Restaurant Award finals in May, we speak to some leading Irish chefs about the country's growing confidence in Irish-made produce

Sponsored by Restaurants Association of Ireland 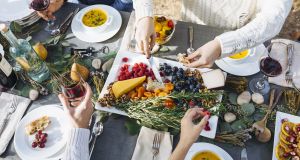 Research shows that visitors don’t have a great perception of food before arriving in Ireland, but when they arrive they have an amazing experience

In the last few years the transformation in the Irish food scene, that was building for over two decades, has finally blossomed into something special. Irish chefs have stopped looking outwards for food influences and dishes, and realised the value of the natural, world-class produce we have on this island, and we all need to shout about it. Irish chefs are more confident than ever about promoting their food and the producers they are using. From cafes to gastro-pubs to the increasing number of Michelin star restaurants across the country, Irish food and cooking has never been better and people around the world are starting to notice.

Next week’s Irish Restaurant Awards, run by the Restaurants Association of Ireland, celebrates the “best in class” of the industry, and the passion and dedication they have shown in providing fantastic food experiences throughout Ireland. This will be the 11th annual awards and after the regional finals the all-Ireland final is in Dublin on May 13th where more than 1000 guests will be treated to a five-course gala dinner cooked by five previous winners.

The diversity and quality of produce which Ireland provides is now being recognised. And while Irish food and ingredients might be having their day in the sun, it was not always the case. Ross Lewis, chef and proprietor of Michelin Star restaurant Chapter One in Co Dublin, was pioneering in his belief that if he told the story of Irish food as best he could, it would resonate. He took that risk and it is still paying off to this day.

“What we endeavoured to do here [in Chapter One], and what I’ve been striving over the years to do, is to be an Irish restaurant of international standard in Ireland. For me, it was very clear from way back it was about reflecting what is good about Ireland and Ireland’s food and artistic landscape. We have Irish craftspeople making stuff for the restaurant, furniture, art from Irish artists and the artisan. It was always about connecting the artisan, arts and craftspeople and the food people, doing it through the prism of Chapter One. Authentic, tasty food with a heart and soul and sense of place.”

Lewis believes that local and Irish products left to speak for themselves were always what connected with people. However, when he first began, this was not the norm. He believes it is a growing confidence that’s changed things.

“I would have been very influenced by Myrtle Allen. There are a couple of people that come along in your time that have a profound influence in what you do, she was one of them. We are a small island nation, we were always looking to the outside for influence. We were heavily influenced by France and then there was all this fusion cooking and confusion cooking and yet you could go to Clonakilty, Co Cork and nobody would serve you Clonakilty black pudding. What’s changed is that there is now a confidence amongst Irish chefs.”

“I found that in the last four or five years chefs, because of the trend of buying local, are much more supportive of local growers. It’s something we can all be proud of. We’ve certainly turned a corner because I was on the sidelines looking at this for the last 27 years, and it’s nearly there now which is amazing,” said Lewis.

Rob Krawczyk is the chef and proprietor of Restaurant Chestnut which is a one star Michelin restaurant in Ballydehob, Co Cork. He thinks we are very fortunate to have the produce that we do on our doorstep and this era for Irish food has been a long time coming.

“I think we’ve been at it for years and years, the smaller producers and chefs alike. I just think now with social media, it certainly helps. It’s a slow progression and I think we are now developing our own food culture. If you go to Italy, it’s in their family, it’s in their genes for hundreds of years, but I think we’re developing that now. We are slowly getting it to that point where it’s being recognised that this is Irish food, Irish produce, Irish chefs. We are creating our identity, which is great. From poultry, meat, fish, vegetables, everything, we are incredibly lucky. Our produce stands up to the best in the world,” said Krawczyk.

Nicola Zammit and her husband Josef Zammit own and run TwoCooks restaurant in Sallins, Co. Kildare. They have lived and worked abroad and are excited about how the Irish food scene is evolving. However, she would like to see more chefs and proprietors take risks with smaller menus.

"Everybody comes here for hospitality and we are famous for it, but if we can just match amazing food experiences to that hospitality that people say 'we went there, it was amazing and I had amazing mussels.' I think if everyone just does a couple of things that they are really, really good at, which is what you see in Australia and South Africa and France and Italy. Just do amazing mussels and be famous for mussels and people will come back. Instead of doing 20 things that are average and maybe going off,” said Zammit.

With any successful industry, there needs to have been support and positive working relationships created to ensure consistency and quality. Mark McGowan is president of the Restaurants Association of Ireland and director of Scholars Townhouse Hotel in Drogheda, Co Louth. He believes a lot of the success is down to the industry working together.

Our goal should be spreading this message to a wider audience

“The number one element that makes this work is collaboration. The collaboration from farm to fork is what’s important and the fact that people are now, 20 years later, because of social media engagement, because of the collaboration [between chefs and producers],because of the food circles, people know where to get information. I think we are definitely, as a nation, doing a fantastic job. It’s down to collaboration in all parts from Fáilte Ireland all the way down to the producer and chefs plating up (that produce).”

Adrian Cummins is chief executive of the Restaurants Association of Ireland and believes future success for the Irish food scene is to promote it, share it and encourage international visitors and journalists to visit and experience it.

“We need to get this message out of Ireland to the wider audience across the world that Ireland is the new Denmark, Ireland is the new trend-setter for food across the world. All the research shows that visitors don’t have a great perception of food before they arrive in Ireland, but when they arrive to Ireland we’ve moved the dial to a level where when they leave they have had an amazing experience of the quality of Irish produce, the great restaurants that they’ve visited, the great experiences that they’ve had and they really believe that Ireland is doing fantastic things around food. Our goal should be spreading this message to a wider audience.”

How the Irish Restaurant Awards works

In the run up to the all-Ireland final there have been regional awards in each of the four provinces. The process begins with a nomination from the public across a range of categories like “Best Chef,” “Best Cafe,” “Best Casual Dining,” to name a few. These are hosted by The Irish Times, then independently audited and a panel of experts from across the country choose their top picks in each category. These are combined with the public votes to decide the winners in each county, region and Dublin shortlist for the year.

The next stage is the Regional Awards where the Irish Restaurant Awards team travels around the country to the four provinces to award regional and county winners. The winners then receive a mystery guest inspection and this result accounts for 40 per cent of the final score in choosing the winners in each category. Then the panel of experts choose their top restaurants (which accounts for the other 60 per cent) to reveal the overall winners.

For more information about the Irish Restaurant Awards visit irishrestaurantawards.com