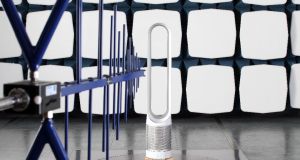 Dyson engineers have spent years travelling the globe, testing the air quality in people’s homes. In doing so, they have detected the presence of pollutants, odours and gases, some innocuous and others which may be harmful to respiratory health.

With 25 years’ experience in air flow and filtration, Dyson have expanded from vacuum cleaners to fans, hand dryers, hair dryers and now purifiers.

From the research Dyson’s team of engineers and microbiologists carried out, they have discovered the air to contain, among other things, benzene, carbon and coal dust, dead skin and disintegrated faeces as well as formaldehyde.

With this in mind, they have spent years exploring a product that could purify the air, taking away some of the smallest particles floating around people’s homes.

This resulted in the Dyson Pure Hot + Cool Link, a fan and heater which purifies the air all year round.

Here, we explore the technologies.

Air multiplication technology
When air flow is forced to change direction, for example by blades in a traditional fan, the disrupted air is turbulent and noisy.  Dyson fans use air multiplier technology, which doesn’t buffet the air, and have been acoustically engineered to be quieter than conventional fans.

Air is drawn through the base of the machine, passes through the motor and is then channelled equally into the two sides of the machine’s loop. As pressure in the loop builds, air is forced out at high velocity, projecting a controlled flow of air far across the room. The surrounding air is then drawn through and around the loop, amplifying the volume of air projected.

Other purifiers only focus on capturing particles down to 2.5 microns, but Dyson purifiers use a high-efficiency 360-degree glass HEPA filter. The filter media is pleated over 200 times, giving it a huge surface area, to capture 99.95 per cent of allergens and pollutants as small as 0.1 microns from the air. To put that in perspective, a strand of human hair is around 50 microns, so 0.1 microns is incredibly small.

Intelligent sensing
Two sensors are located in the base of the machine, to constantly monitor the indoor air quality. The first of these detects particles larger than 0.1 microns such as pollen and allergens, whilst the second sniffs the air for VOCs (volatile organic compounds), detecting a wide range of gases such as fumes. All this data is sent straight to the Dyson Link app, making the invisible pollution visible and allowing us to monitor and keep on top of indoor air quality.

This is great in theory, but does it mean the machine constantly switches itself on and off every time a pollutant enters the room? In fact, there are further controls to stop incessant turning on and off. The sensors take the average dust and VOC readings over 45 seconds – rather than reacting immediately to every pollutant detected – to stop very short events starting the fan and constantly switching on and off.

It also keeps a track of historic data so that users can monitor pollution levels and compare them over the days and weeks.

Putting the Dyson V11 through its paces

Measuring the real benefits of connecting your home appliances