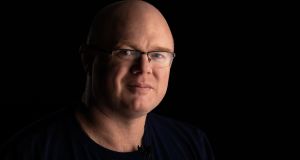 Photographer Eddie Hennessy: “Supports are available to businesses to employ people with disabilities, but not to employ oneself.”Photograph: Eileen O’Connor Photography

Ireland is missing out on the entrepreneurial potential of a significant cohort of people. It’s a fact wedding photographer Eddie Hennessy knows only too well. The former international judo competitor had a life-changing stroke in 2011, aged just 33. It left him with weakened limbs, difficulty reading and writing and suffering from chronic fatigue.

Despite the difficulties, he pursued an interest in photography, taught himself the art of portraiture and set up one of the most in-demand wedding photography studios in Cork. All along the way, he has had to battle what he believes is an unsupportive system.

“Because I couldn’t get a job, I decided to set up my own business,” explains Hennessy. “To start the business, I had to change my social welfare payment to Partial Capacity Benefit (PCB) which meant a reduction of €50 per week, but I persevered and won ‘Wedding Photographer of the Year’ in 2018.

“I need to employ a person to carry all of my equipment and undertake the tasks that I cannot do myself due to the nature of my disability. However, I recently received the news that my PCB payment will be reduced by a further €50 a week.”

What galls him most is a central irony: “Supports are available to businesses to employ people with disabilities, but not to employ oneself.”

A new report by Tom Cooney, professor of entrepreneurship at Technological University Dublin, (formerly DIT), Pathways to Entrepreneurship for People with Disabilities in Ireland, indicates Ireland has one of the lowest employment rates for people with disabilities in the EU, at 26 per cent compared to an EU average of 48 per cent.

Among people with a disability of working age, more than one third (35 per cent) are without work for more than four years. Despite this, no tailored supports are available for people with disabilities to start their own business.

Other major barriers include difficulties obtaining start-up capital due to poor credit ratings, frequently caused by low-income employment or unemployment.

Yet the benefits are clear. Self-employment helps people with disabilities to participate socially and economically. It also allows them to choose their own hours or work remotely, providing more elasticity in coping with a disability than can be found in paid employment.

Some benefits are unmeasurable. Hennessy has said his business helped restore in him his sense of self-worth.

That creates a “dependency mentality” which will not help all individuals, and which in many cases is simply not working. “The rate of employment for people with a disability is shocking,” he says.

Though rates of pay data are difficult to get, anecdotal evidence suggests wage disparity is a significant problem too, he says.

“Yet when looking at income options and how to put food on the table, people look at either employment or welfare. If they go to discuss the future with family or advocacy organisations, nobody is talking about self-employment.”

The report aims to “shine a light on the subject, and to create discussion around self-employment as a viable career option for people with a disability”, he says.

However, any discussion on the topic must be inclusive, he says, pointing out that in some cases it has been suggested to him that supports be focused on people with particular types of disability, “which means, here we are trying to develop an inclusive strategy, and yet we begin by excluding people?”

Rather, the report suggests State agencies and others should take a “funnel” approach to supporting people with disabilities into self-employment.

The aim is to enable interested individuals to self-select their participation, acting as a filter of business ideas, and making available the most expensive start-up supports, such as one-to-one mentoring, only to those whose business ideas are most likely to succeed.

The pathway should, Cooney suggests, begin with an awareness campaign which drives people to a website, a suitable start-your-own-business programme, and on through to mentoring, finance and network building.

“It is important that everybody within the disability community is given the opportunity to consider self-employment as a career option,” concludes the report. Cooney suggests that one day a network of entrepreneurs with disabilities will be established here, as is in the UK, Canada and other countries, members of which will act as role models for others to follow.

“The notion of the funnel is that it is by its nature open to everyone, and through a process of filtering, including by the person themselves, those who are committed to starting a business are given the appropriate supports,” he says.

It’s important to give the right supports at the right time. “When I looked at the research internationally, and this is not just a problem in Ireland but in most countries, what I saw was that the really successful programmes had all finished within five years.”

The reason is “because those dedicated programmes, which offer one-to-one mentoring, are highly resource-intensive and therefore expensive, and not sustainable long term”, he explains.

His funnel approach is designed to make best use of available of resources. It relies on existing programmes, such as those run by the Local Enterprise Offices, to ensure that those who reach the lower, more expensive, end of the funnel supports are those who have the best chance of being viable.

For it to work, however, the “benefit trap”, which makes the cost, and risk, of starting a business for someone with a disability so disproportionately prohibitive, must be dismantled, he says.

“Unless the Department of Social Protection addresses that, the likelihood of people moving out of welfare and into self-employment is greatly diminished.”

An effective support system must also be flexible enough to help cover periods where someone with a disability might, for some reason, need to “park” their business, perhaps for a couple of months, before resuming it, without being unduly penalised, he suggests.

Interest among people with disabilities for this topic is strong, if the booking out of tickets for a half-day seminar organised by Cooney in April is anything to go by. The Covid-19 crisis has seen it rescheduled for the autumn.

While the pandemic must take precedence, he explains: “The risk now is that people with disabilities will suffer the highest rate of unemployment in the event of any subsequent recession and will not be on anyone’s top 10 list of priorities.”