Yes: Why we should vote in favour of lowering the age of candidates eligible to become President

‘There is no scientific evidence to suggest someone is more emotionally mature at 35 than at 30, and no guarantee that as people age, they will earn more life, or political, experience’ 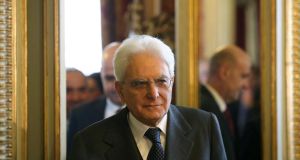 ‘Italy must have one of the world’s highest presidential candidacy age thresholds, requiring its candidates to have reached age 50. But equally, there is a list of countries with lower age thresholds. Slovenia and France both set the age of candidacy at 18.’ Above, newly elected Italian President, Sergio Mattarella, arrives at Constitutional Court in Rome, on January 31st. Photograph: EPA/Ettore Ferrari

Greater diversity on the ballot and more choice for voters are among the main arguments for reducing the age of candidacy for the position of president. Ultimately, voters will continue to choose their president.

The ACE Electoral Knowledge Network recommends that the criteria employed for candidate eligibility should be “rational, reasonable, and objective”. Citizenship and age criteria are common and within these categories, there is great variation. There is no one definitive option.

There are a large number of countries which require higher candidate age thresholds for presidential elections or appointment processes over other types of elections. Like Ireland, Austria has a presidential candidacy age threshold of 35. Germany, Lithuania and Romania set the limit higher at 40 and Italy must have one of the world’s highest, requiring its presidential candidates to have reached age 50. But equally, there is a list of countries with lower age thresholds. Slovenia and France both set the age of candidacy at 18. France is an interesting example, in that the president holds far greater powers than is the case in some of the other countries with more ceremonial presidential positions listed here.

An important argument to consider is that any choice of an age threshold above the age of adulthood at 18 is a little arbitrary. There is great simplicity and appeal in the option which has been selected by some of our European neighbours, among them Finland, the Netherlands and Denmark; all adults aged 18 and over can vote and become a candidate in any election. In Ireland, candidates for the Dáil and the European Parliament must be aged 21 years but candidates for local elections need only be aged 18. It is an established principle that countries may opt for a higher age threshold for some political offices in accordance with the importance attached to the position. Although, in many countries presidents have vital constitutional powers, in practice, public life is more directly shaped by the elected members of parliament, where lower age thresholds apply. The choice of a higher age candidacy requirement is very subjective. Why 35, 40, 45? There is no scientific evidence to suggest someone is more emotionally mature at 35 than at 30, and no guarantee that as people age, they will earn more life, or political, experience.

Internationally, youth organisations have played a leading role in campaigns to lower the age of candidacy for political office. Often, they also seek a lower voting age. They make a strong case that full political participation rights include the right to become a candidate, as well as the right to vote, and both processes presume careful thought and consideration on the part of the citizen. However, they also tend to argue that lower candidate age thresholds will lead to greater youth participation in politics. This is a difficult case to make and political science research on election turnout and youth political participation indicates that it is influenced by a wide series of factors and candidate age limits are not prominent among these.

Inevitably, any aspiring young presidential candidate in Ireland will face the far more difficult hurdle of navigating the political party dominated presidential nomination process. Getting onto the presidential ballot paper requires nomination by either 20 members of the Oireachtas or by four of the county and city councils.

The referendum on reducing the age of presidential candidacy is essentially a question of broadening the potential candidate choice that will be available for future generations of voters. It will be one more step towards having a broader reflection of society on the ballot paper. Ultimately, voters will always have the right to vote for their preferred president. Diversity and choice are important at elections but it must be said, the decision to proceed with this specific referendum when there are many more pressing political reform issues, including a long list provided by the Constitutional Convention, is nothing short of bizarre.