Was Gay Byrne a feminist?

There were certainly notable missteps, but he gave Irish women a much-needed voice 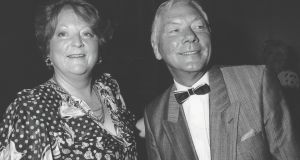 Gay Byrne and his wife, Kathleen Watkins in 1993

Was Gay Byrne a feminist?

It was his fellow RTÉ presenter, Miriam O’Callaghan, who put this intriguing theory before the nation on Tuesday night, during The Late Late Show special in his memory.

“Possibly because he was so close to his mom; [his wife], Kathleen; [and his daughters], Suzy, Crona, I think at a very early age, he was a feminist,” O’Callaghan said.

Byrne, it is clear, respected women. He gave them a voice. He championed them, on screen and off. But was he really a feminist? Would a man who was a traditionalist in many ways have been comfortable with the term?

The word “feminist” can be a tricky one, simply because – like Byrne himself – it means so many different things to so many people. In the purest sense of believing in, and advocating for, the equality of the genders, Byrne was a feminist.

He was a feminist when, in March 1971, he gave over an entire show to the newly formed Irish Women’s Liberation Movement, and handed his seat over to Marian Finucane.

He was a feminist when – despite being a regular Mass-goer – he repeatedly riled the bishops of the Catholic Church, for so long the chief instruments in the oppression of women.

He was a feminist when he looked beyond the opaque surface of our public selves to expose the uncomfortable truths roiling beneath. He bridged the chasm between the curtain-squinting, God-fearing, inward-looking Ireland of the past, and the more compassionate, courageous and forgiving one that was emerging.

He didn’t always get it right. Not even Gaybo always got it right.

He was not a feminist the night he interviewed Annie Murphy in 1993 – in hindsight, not so much an interview as an ambush. Members of the audience came on to pick holes in every aspect of her claims about her relationship with Bishop Eamonn Casey, from the colour of his dog to whether there was a full moon on a particular night.

On air Byrne announced to Murphy that he had information that suggested Casey “didn’t have faith in your capacity to look after the child”, by then a man of 20. “If your son is half as good a man as his father, he won’t be doing too badly,” he said. A justifiably enraged Murphy – who cut a lonely figure on set – replied: “I’m not so bad myself.”

He was not a feminist the night in February 1984 when he tossed aside the copy of the Sunday Tribune, its front page headline reading: “Girl, 15, dies giving birth in a field” with a tight “Nothing terribly exciting there”.

But it was a sign of how much the women of Ireland had come to rely on him as a safe space for their stories that, in the days after Ann Lovett’s lonely, horrifying death, the letters poured in to the radio show.

In response Byrne did what he did best, what the correspondents had known he would do. He kept himself out of it, and let the women’s stories speak. The accounts of those who had given birth outside of marriage kept coming; one devastating, unforgettable shot after another across the bows of official Ireland.

We’ve heard a lot in recent days about how Gay Byrne liberalised Irish society. It is a mark of his genius that it has never been clear whether this was by accident or design; whether it was just a by-product of him being very, very good at his job, and having a nose for the issues that would get them talking, at a time when Irish society was on the cusp of great change anyway.

Those who have worked with him say that it was the predominantly female audience that shaped his groundbreaking radio programme, and Byrne was just their conduit. If he was a feminist, he was an accidental one.

Feminist or not, he gave Irish women a voice at a time when so many of the other institutions of Irish life would not. He addressed the things that mattered to them with an air of what’s-all-the-fuss-about common sense – only partly belied by the glint in his eye that told you he knew this was telly gold.

From his chair on the set of that 50-shades-of-beige set, he oversaw epic rows, devastating revelations, moments of simple humanity. He had an appreciation for the uniquely Irish appetite for giving out. Every Saturday night, and later on Fridays, he unleashed tsunamis of it all around the country. How he revelled in those tsunamis.

He guided Ireland through Vatican II and the Troubles; the Beatles and Boyzone. He ripped open condoms and taboos. He held Sinéad O’Connor’s hand. He went places no one else would go: marital beds; brothels; nuns’ sex lives; Padraig Flynn’s finances.

Writing in Magill in 1984, Colm Tóibín reflected that “the show in his view is not there to influence people or explain things to people, or select what is important … We are talking about showbusiness, ladies and gentlemen, we’re talking about filling the hall. The show is there to entertain, to pack them in, to keep them watching.”

He did that better than anyone before or since. He filled the hall, he packed them in, he listened attentively. He was, always and uniquely, your host Gay Byrne.