Political structures are alienating next generation of activists 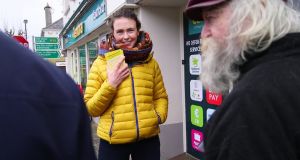 The sharp divisions that appeared in the Green Party over recent weeks have been both dismissed and denigrated. The mostly young members of the Just Transition Greens have been criticised for their unwavering commitment to their personal beliefs and written off by others as idealists – unwilling or unfit for compromise.

To many, holding true to one’s principles is a mark of admirable conviction and integrity, but as with most things in life, perception is subjective.

Instead of dismissing the voices of this next generation of activists and political leaders, shouldn’t we be asking why party political structures can’t accommodate them?

Of the numerous fresh faces to brave this island’s tumultuous political discourse, one name which comes up frequently is that of Saoirse McHugh, who last week resigned from the Green Party. She faced criticism for voicing her view that she doesn’t believe “our pathway to a just and free society lies in electoral politics”. Instead of asking why a young, impassioned, and articulate woman was turning her back on party politics, many instead opted to interpret this sentiment as a slight against democracy. Democracy is, of course, made up of much more than electoral politics and McHugh does have a point.

It’s true that politics requires compromise – party politics even more so – and in recent weeks, many Green Party members have seen just how much compromise will be needed to hold this Government together. For some, it is just too much. Every individual has a limit as to how much of their personal beliefs and convictions they are able to sacrifice in good faith.

What we have in our next generation of political activists is not a collection of idealists, but rather a group who believe so strongly in the courage of their conviction that they are unafraid to walk away. Instead of harnessing this determination, political structures appear to be alienating them, which leads many to the question – can change be better achieved outside of electoral politics?

History says yes. In the words of Frederick Douglass: “Power concedes nothing without a demand.” That demand often has to come from the outside as it is so frequently the case that fundamental systemic change is forgone for reasons of political expediency. Many activists have tried their hand at politics and walked away, unable to concede their vision for the sake of such political favour.

Activism is the backbone of democracy – defined by the process of working together to achieve effective change for the betterment of all, it works best on a non-partisan basis and is politically essential to push against inaction and discrimination that often goes back decades.

Historically meaningful change has often been sparked outside of Government buildings, by independent campaigners, activists and civic society organisations who then place a duty on the Government to enact legislative changes. The origins of any number of rights movements can be attributed to people and not parliament – from the woman’s suffragette movement, to the US civil rights movement – with many being led by unelected civic leaders. That’s not to say that parliament does not have an essential role but rather that the two work in tandem. First is the cause, then the action.

We’ve seen the effectiveness of these people-powered campaigns not just on the international stage but here in Ireland. Many of the progressive steps to lift the shroud of conservatism that this country has taken over the past decade stem from civic society. Some of our most veracious advocates for systemic change, operated outside of electoral politics. The Yes for equality and Repeal the 8th campaigns brought an undeniable energy and urgency to the steps of Leinster House and the #Hometovote movement enfranchised an entire generation of Irish citizens to remain politically engaged. It’s hard to imagine these campaigns and the progress they inspired being achieved if the issue had been left entirely in the hands of TDs and Senators.

As an independent campaigner I’ve benefitted from being outside electoral politics, and especially from being outside party politics. So much of our political discourse is made up of slinging mud at the opposition. If I represented the opposition I would be no different. But staying neutral and unaligned with any one party made our campaign more politically palatable and helped us bring about a tangible change.

This is undeniably appealing to those not yet maligned by the political dogma and who look to activists such as Greta Thunberg for inspiration. But does activism and electoral politics have to be mutually exclusive? I hope not. I hope that the departure of many committed young people from Ireland’s political arena will be taken as an invitation to reform party politics and institutions. We must recognise that working towards a free and just society isn’t dependent on being elected.