Go ahead - celebrate the new decade a year early. Just count me out 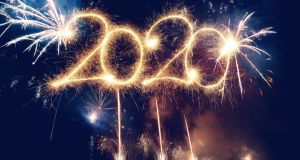 The balloons are probably up. The bunting has been bought. The invitations are issued.

It’s that big night when one decade ends and another begins.

It’s always wise to get ready in plenty of time if you want to have a night to remember on a special occasion like the dawning of a new decade.

And there’s no doubt that most of our population, most of our media personalities, most of our retail organisations and, indeed, most elements of the State itself are ready good and early for this celebration.

You probably have me down as a grumpy old pedant. I can’t deny I’ve heard that term applied to me a few times over the years. So I figured that might be the reaction of many people, the ones who didn’t come straight out and call me a party-pooper.

It is absolutely fine with me if you wish to celebrate the end of the decade a year early. Go ahead. I just won’t be taking part.

I didn’t even complain when the entire country celebrated the new millennium a year early at the end of 1999.

Well, the entire country with the exception of government minister Seamus Brennan who chaired the National Millennium Committee which ruled out fireworks or any kind of major public celebration in Dublin. At one point, crowd safety was trotted out as an excuse. But he clearly had no appetite for it. And at least we all got a millennium candle and had a tree planted in our names in one of Coillte’s forests. Beat that for exciting.

I always suspected that maybe Seamus was a bit uncomfortable with the whole business of celebrating the Millennium a year early only, being a politician, he didn’t want to be seen as one to spoil a party.

And even if Sydney and Egypt and London and Paris and New York hosted events a bit more spectacular than tree-planting in a remote forest, that couldn’t and didn’t change the simple fact that they got their dates wrong.

Of course, it was convenient. The calendar changed from 1999 to 2000 so it looked like a new millennium. A new millennium for the innumerate.

But the fireworks and the parties didn’t make it right.

You see, there was no Year Zero between 1 BC and 1 AD.

The system was devised by a mathematician called Dionysius Exiquus of Scythia Minor back in 525 AD. He based the calendar on the supposed year of the birth of Jesus which, it is believed, he calculated using the Gospel of St Luke. His calendar was not adopted generally until 1582, under the instruction of Pope Gregory, who gave it its name. Greece, incidentally, didn’t fully adopt the Gregorian calendar until 1923.

And, I’m sorry to retrospectively spoil the fun you may very well have had on New Year’s Eve 1999. That’s if you managed to have any despite there being no major celebration in our capital city.

But like a misplaced apostrophe, the celebration of a major event on the wrong date is irritating to those of us who like to get things right when we can.

Put away the bunting, deflate the balloons and please let's not have front page pictures of 'the first baby of the new decade'

I can’t imagine there would have been general acceptance if the government of the day had decided to celebrate the centenary of the Easter Rising in 2015 or if it was decreed that St Patrick’s Day next year would be celebrated on June 17th because someone thought the weather might be better.

This isn’t a new row. Back at the end of the 19th century, the New York Times, Pope Leo and Russian’s Czar Nicholas insisted that the 20th century would begin on January 1, 1901. Others, such as Kaiser Wilhelm of Germany disagreed and said it started on January 1st, 1900, leading the New York Times to mock him, saying he must stand in “solitary grandeur as the only man of prominence who cannot count up to 100”.

So put away the bunting, deflate the balloons and please let's not have front page pictures of “the first baby of the new decade”.

We should all wait until the time is right to cheer in a new decade.

Or Grumpy Old Man day, as it’s called in my house.