World View: Commission lacks teeth in its promotion of rule of law

Brussels cannot even recommend enforcement against laggards like Hungary 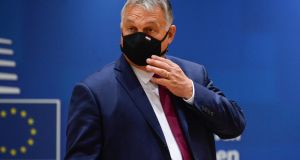 ‘The conditions introduced by Hungary to enable foreign higher education institutions to carry out their activities in its territory are incompatible with EU law,” the union’s Court of Justice ruled on Tuesday, an important blow for academic freedom and the rule of law.

It comes a bit late, however, as the Central European University, for which the 2017 law was tailor-made, has moved most of its operations from Budapest to Vienna, becoming, as rector Michael Ignatieff points out, the only university, since the 1930s, to be expelled from a European state.

The ruling is the latest chapter in attempts by the commission to bring Viktor Orban’s Hungary to book for repeated breaches of EU legal standards – Poland, Bulgaria, Romania and Bulgaria are in its sights too – and comes only days after it published its first annual rule of law report, the latest weapon in the union’s very ineffective enforcement toolbox. A far cry from the sort of muscle it can exercise for breaches of economic rules.

The report, which describes judicial independence, transparency and anti-corruption measures in the member states, and will undoubtedly evolve benchmarking standards, is mainly about “promoting a rule-of-law culture” in the EU, justice commissioner Didier Reynders says. An acknowledgment that, in truth, the new mechanism lacks teeth. It doesn’t even have the power to recommend enforcement action against the laggards.

That is still only possible through the court in individual cases, and more generally by means of the cumbersome article 7 treaty procedure which can be invoked by the Council of Ministers in case of a “clear risk of a serious breach of the [union’s] values” or of “the existence of a serious and persistent breach” of such values.

Hungary and Poland have already been cited and are undergoing the lengthy review process, but know that ultimately each will use its veto to protect the other from any sanctions. Article 7 allows in theory for withdrawal of voting rights from an offender, but the latter only needs one ally to stymie the process.

Another enforcement front has opened up in the last couple of years – the idea of using the union’s funding as leverage. The “solidarity” expected from the union by Hungary and Poland to help bring their economies up to EU average levels should not be a one-way street, member states and MEPs argue.

And a fierce argument has just this week seen the budget authority, the European Parliament, threaten to block agreement on the €1.7 trillion coronavirus recovery fund if provisions for rule-of-law conditionality are watered down.

Back in 2018, the commission, fearful of a Hungarian or Polish veto, proposed in its Multiannual Financial Framework budget package clawback measures to penalise states if rule-of-law deficiencies undermined or threatened to undermine the financial interests of the union. The clawback would only apply to EU programmes that were affected by fraud or mismanagement – albeit already possible under existing funding rules.

Member states wanting broader powers to respond to non-funding issues like attacks on judicial independence, nevertheless, agreed at the ministerial council to the limited commission proposal and to a German presidency compromise that reversed the voting arrangements by which a suspension of budget payments could be decided.

The council would now need a qualified majority vote of states to actively approve such measures, while in the prior commission proposal they could only have vetoed them with that same majority. In short, it requires a stronger commitment from member states.

The German position was endorsed by ministers against the votes of the Poles and the Hungarians. Finland, Sweden, Denmark, the Netherlands, Belgium, Austria and Luxembourg are currently opposing the proposal because they think it is too weak. Ireland is supportive of the German position, fearful anything stronger will not pass.

MEPs appear to have just woken up to the toothlessness of the original commission compromise and have been angered by what they see as a further attempt by the presidency to dilute the measure.

They have also this week voted overwhelmingly, by 521 votes to 152, for a new mechanism with binding provisions, timelines and targets for implementation and based on the European semester that is aimed at streamlining the economic policies of EU states and to sanction those that break common rules. The proposed mechanism also aims to widen the scope of scrutiny to all values in the EU treaty, including human dignity, freedom, democracy, equality, the rule of law, respect for human rights and minority rights.

It is an ambitious move that would do much to embed the concept of a union of law but would require the unanimous support of member states – which is unlikely to be forthcoming.

And it is doubtful whether the majority of MEPs will ultimately want to use their ability to see the crucial cash distribution delayed.

1 One hundred Irish retailers for all your online Christmas shopping
2 Travellers call on comedian Des Bishop to apologise for ‘absolutely appalling’ comments
3 ‘Groundbreaking’ direct provision replacement forecast to save millions
4 Covid-19: Backlog forces HSE to skip calls to thousands of close contacts
5 Michael McDowell: What exactly is the price of accepting this Nphet advice?
Real news has value SUBSCRIBE