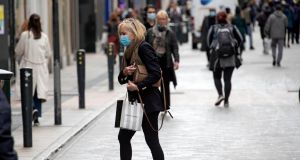 The Central Bank’s forecast suggests the hit from Covid will be significantly less than feared and the economy could return to decent growth next year. Photograph: Colin Keegan

This week we learned three important things that will strongly influence the way our politics takes shape in the coming weeks and months.

1 The politicians broke with the public health experts

But as it has become clear that society will have to learn to live with the virus for at least the medium-term future, so it has become appropriate that other elements become part of the Government’s decision-making framework: the necessity to preserve economic activity, the mental health of people threatened by a protracted lockdown, the medical treatments and early interventions that don’t take place in a lockdown, and so on. It’s not that the public health advice on containing the virus isn’t considered, of course; it’s just that this isn’t the only thing that is considered.

The personal elements – the return of Dr Tony Holohan, the clash with the leaders of the Government, the who-knew-what-when controversy that focussed on Stephen Donnelly – probably clouded the significance of this development. Personalities affect politics in profound and sometimes decisive ways and Irish political history is replete with examples. But the important thing was not that Dr Tony fell out with Leo and Micheál and Martin Fraser, the important thing is that the Government chose to reject the lockdown advice from the public health advisers.

If the Coalition collapses in disharmony, the voters won’t conclude that just one of them is unfit for government; they’ll decide they all are

That also constitutes a political gamble. Currently the rising rate of infections is producing far fewer hospital and ICU admissions than the first wave did. But if they catch up – and the health service becomes in danger of being overwhelmed – then there may be a very steep political price to pay.

There was one more aspect of this that I think is significant: the unity of the Government. After the story came apart a little, they stuck together. This is what happens to coalition governments – if they can manage to get over the inevitable early difficulties, events push them together. There is still a lot of private criticism of Fine Gael by Fianna Fáil and vice versa; but there is less than there used to be. Ultimately they will understand – I think – that they are in this together. If the Coalition collapses in disharmony, the voters won’t conclude that just one of them is unfit for government; they’ll decide they all are.

2 The growth of Sinn Féin continues

The remarkable result in this year’s general election for Sinn Féin came late in the campaign and took everyone by surprise, including Sinn Féin. Remember that a week before the campaign started, the party was chucking people off tickets because it was afraid it was running too many candidates. But since February – and more especially since the formation of the current government, as the Irish Times/Ipsos MRBI poll demonstrated this week – the party has been not just consolidating that new support, but growing it.

In recent days, two senior civil servants observed to me that they found it hard to see any circumstances in which Sinn Féin was not the largest party after the next election. That’s a helluva long-term prediction to be making at a time of such political volatility. But you can see where they’re coming from. At some point over the coming years, the Civil Service will start to prepare for a Sinn Féin-led government.

Nearly 40 per cent of under 35s say they would vote for the party. By this time next year, it could be 50 per cent

A significant part of the Sinn Féin appeal has been “left populism” – the corrupt elite vs the virtuous people, insiders vs outsiders, golden circle vs those left behind – and its impressive message discipline ensures that there is hardly a speech or a press release that does not hammer home the point. To Sinn Féin’s leaders, this is a political tactic; to many of its supporters, it is a world view. But it is certainly politically potent. Moreover, the political and economic conditions which make it so potent are unlikely to depart any time soon. With mass youth unemployment a real prospect for this year and next, there will be an eager audience for the party’s message. Already nearly 40 per cent of under 35s say they would vote for the party. By this time next year, it could be 50 per cent.

For all the immediate pessimism about Covid, and its effects on our society and economy, recent economic assessments - including one by the Central Bank this week - strongly suggest that the economy will not be destroyed by the pandemic.

Parts of the economy will experience extreme distress and will emerge from the crisis considerably smaller. But at least some of that will be compensated by the multinational sector and others that are continuing to grow. This week, the Central Bank’s forecast – following the Department of Finance projections the previous week – suggested that the hit from Covid will be significantly less than previously feared and that the economy could return to decent growth next year. The Department of Finance figures also show that tax receipts have not been monstered to the degree expected earlier this year.

All of this – along with the gargantuan public borrowing currently under way – gives the Government significant firepower to tackle the social and economic fallout from the pandemic. I expect we will see that deployed in what is likely to be a hugely expansionary budget on Tuesday. It also explains why the Government was unwilling to shut down the economy as a precautionary measure.

As it faces its first budget – always a huge test for a new administration – the Coalition faces a formidable array of political and economic forces ranged against it. This week was evidence enough of that. Strangely though, it also showed that this heretofore rickety government may be coming together – and that it has some strengths to call on.