Why world meeting of families more than potential papal visit

Rite & Reason: Family is ‘first school for the young, and best home for elderly’ 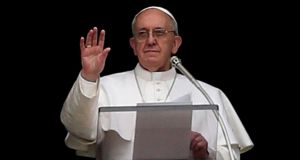 Pope Francis has asked that the preparation for the Irish meeting would encourage such a conversation by giving families the opportunity for deeper reflection on his document, the Joy of Love (Amoris Laetitia). Photograph: Niall Carson/PA Wire

From August 21st-26th, 2018, families from across the world will gather in Ireland for the ninth world meeting of families.

Much of the local commentary has focused on whether Pope Francis will attend and what this might mean for the future of church and society in Ireland.

Those of us involved in organising the event are careful not to talk about a papal visit. Not because we aren’t delighted at the prospect of the pope coming but because, if he comes, it is clear he will come first and foremost for the world meeting of families itself.

The family has been fundamental to the ministry of Pope Francis from the outset. He often repeats the famous phrase of St John Paul II that “the future of humanity passes by way of the family”, carefully adding, “and the future of the church”.

He sums up the reality of family life in a myriad of catchy, accessible, often moving phrases that any one of us, involved in Church or not, can easily associate with.

The family is “the nearest hospital, the first school for the young, and the best home for elderly”. “Sometimes plates can fly”, “children can be a headache”, “how much happier our family lives would be if we understood the importance of the words please, thank you and sorry!”

In all of this, Pope Francis remains passionately convinced that the family continues to be “good news” for the world. He believes that in the often complex, messy realities of modern family life, the grace and love of Jesus Christ is alive in a galaxy of daily acts of kindness, tenderness, generosity and fidelity, often lived heroically amid immense human fragility and overwhelming social challenges.

In a world easily given to violence, inhumanity and disposal of the other, he remains convinced that it is this messy but grace-filled reality of the family that so often holds our lives and the world itself together.

In personally inviting Ireland to host the next world meeting of families, I believe Pope Francis is placing his trust in our reputation as a warm, compassionate and outward-looking people, a people open to the world and with a strong missionary tradition.

As he said in his official letter convening the next meeting, “I dream of an outbound church, not a self-referential one, a church that does not pass by far from the wounds of humanity, a merciful church that proclaims the heart of the revelation of God as love, which is mercy.”

It is important that the meeting in Ireland, as well as the commentary and analysis leading up to it, avoids the temptation of becoming self-referential, of approaching the event and its significance solely in terms of Irish issues and the Irish church.

The year ahead is an opportunity to change the conversation, to focus instead on the global issues, the common human values and mutual interest between Church and society that converge in working together for the wellbeing of the family.

Pope Francis has asked that the preparation for the Irish meeting would encourage such a conversation by giving families the opportunity for deeper reflection on his document, the Joy of Love (Amoris Laetitia).

In response to that request the church in Ireland has launched a one-year programme under the title Amoris: Let’s Talk Family! Let’s Be Family!

Available at amoris.ie and the world meeting of families 2018 official website, this programme will provide a set of online resources and practical activities throughout the coming year, highlighting key themes from the Joy of Love, including the first set of digital animations on the pope’s document.

The next year offers an ideal opportunity for a national conversation on the priority the family deserves in our lives, in the Church and in social and political policy.

If the world meeting, and the possible presence of Pope Francis are to be more than a fleeting event, this conversation has to have a real impact on the lives of those many families on our island struggling just to cope against the odds.

Fr Tim Bartlett is secretary general for the world meeting of families 2018 - www.worldmeeting2018.ie.

1 Ireland among countries urged to consider reinstating Covid-19 restrictions
2 ‘I’ve been sleeping with my girlfriend’s sister. I need help. What do I do?’
3 Irish Michelin two-star restaurant to sell kebabs and fries from takeaway trailer
4 Maura Higgins: ‘I really hated it. Apart from that massage, the rest of it can kiss my ass’
5 Sinn Féin apologises as member resigns over social media abuse
Real news has value SUBSCRIBE