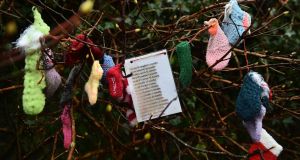 Names of some of the children who died at the Tuam mother and baby home. The moral ground was ceded to the church and with it came the authority over sexual morality and the family and therefore the shaping of national identity. Photograph: Charles McQuillan/Getty Images

Since news broke of the discovery of a mass grave of babies in Tuam, there has been a fear that publication of the report of the Commission of Investigation into Mother and Baby Homes would mark the third in an unholy trinity of Church malfeasance in its stewardship of institutions for the most vulnerable in society.

First there was the report into the industrial schools, then came the Magdalene laundries, both set against the wider backdrop of widespread clerical sexual abuse in the parishes. The auguries were not good.

Instead, to the vocal consternation of some, the Church has emerged relatively unscathed. The commission found no evidence of sexual and very limited evidence of physical abuse, but rather placed the mistreatment suffered by women and girls, some as young as 12, at the feet of the families and fathers.

“Responsibility for that harsh treatment rests mainly with the fathers of their children and their own immediate families. It was supported by, contributed to, and condoned by, the institutions of the State and the churches.

However, it must be acknowledged that the institutions under investigation provided a refuge – a harsh refuge in some cases – when the families provided no refuge at all.”

The merits or otherwise of the report will be debated for some time to come. Critics have rightly pointed to the overwhelming influence that the church has had over Irish society and how this contributed to the treatment of women. Indeed, it is hard to fathom in the progressive Ireland of today how enmeshed the State was with the church.

What marked the Irish out from the middle of the 19th century, a good 50 years or so before the formation of the Irish Free State, was not language, but religion. For the vast majority, to be Irish was to be Roman Catholic – even more so after the partitioning of the island.

Part of Ireland’s self-perceived identity was its moral superiority, a bulwark against the perceived moral decrepitude that was engulfing other nations in the 20th century. This identity was inextricably linked to its religiosity.

The nascent State granted to the church issues of education, health and welfare. The moral, if not the legislative ground was ceded to the church and with it came the authority over sexual morality and the family and therefore the shaping of national identity.

It was a sexual morality that was particularly repressive for women. The core of Catholic morality is the question of sin. Why, as Augustine pondered, do we sin? Why was it, he asked, do we have desires that we act upon, even though we wish to be good?

Augustine thought that the fault lay in our fallen nature which he traced back to our first parents, Adam and Eve, in the Garden of Eden. When they bit into the apple, acting contrary to God’s wishes, they knew shame. This sin, this imperfection in our God-given goodness, was passed on to each subsequent generation.

Its entry into humanity was through the first woman, Eve, who was tempted by the serpent and brought Adam to ruination. Christianity’s particular genius made this original sin generative, passed on from one generation to the next through the sexual act.

Gradually this idea calcified. The creation of a celibate class in the priesthood and female religious created a hierarchy of sexual continence and moral worth. The only justification for sex was its generative aspect. One should only have sex in order to procreate, and only within the bond of marriage.

This sin was intrinsically identified with the female body. Ireland, in particular, struggling as a modern State, viewed the continence of the female body as a mirror to society. The legacy of years of colonisation had bred a particular thirst for ownership of land and the importance of kinship in a country which was largely agricultural and endemically poor.

The passage of land and wealth, in every society, has always been preserved through the bodies of men that women marry, and birth. Female sexuality therefore needed to be kept within strict bounds. The swollen belly of an unmarried woman betokened shame, a threat to the greater family unit in the need to feed another mouth, an encroachment upon the meagre wealth possessed.

The failure of the family to enforce Catholic teaching, to keep its girls continent, brought with it the inference that the girl was the lesser of the two Marys: Magdalene not Holy Mother. The shame not only sinned against the religious dimension of the family, but it spelled something broader, a societal ill that the State had set itself above.

4 Coronavirus: 437 cases and no further deaths reported in State