How do we value a statistical life? 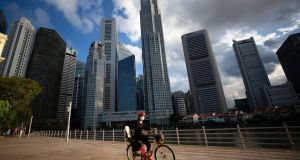 The coronavirus lockdown is saving lives but destroying livelihoods. Is it worth it? I’ve been accused of ignoring its costs. For an economist, this is fighting talk. Love us or hate us, thinking about uncomfortable trade-offs is what we economists do.

Three points should be obvious. First, we need an exit strategy from the lockdowns - a better strategy than President Donald Trump’s, “One day it’s like a miracle, it will disappear.” Expanding emergency capacity, discovering better treatments, testing for infection and testing for antibodies could all be part of the solution, along with a vaccine in the longer term.

Second, the economic costs of any lockdown need to be compared with the costs of alternative policies, rather than the unachievable benchmark of a world in which the virus had never existed.

Third, the worth of a human life is not up for discussion. This week I lost a mentor of unlimited kindness. As I write these words I hear that a beloved family member is also reaching the end of her remarkable journey. Their lives, like the life of any individual, were priceless.

Yet no matter how much we want to turn our gaze away from the question, it hangs there insistently: is this all worth it?

We spend money to save lives all the time - by building fire stations, imposing safety regulations and subsidising medical research. There is always a point at which we decide we have spent enough. We don’t like to think about that, but better to think than to act thoughtlessly. So what are we willing to sacrifice, economically, to save a life?

A 1950 study for the US Air Force ducked this question, recommending a suicidal military strategy that valued pilots’ lives at precisely zero. Other early attempts valued lives by the loss of earnings that an early death would cause - effectively making retired people worthless, and the death of a child costly only if the child could not be replaced by a new baby.

The late Thomas Schelling, a Nobel Prize-winning economist, mocked these errors as he imagined the death of a family breadwinner like himself: “His family will miss him, and it will miss his earnings. We do not know which of the two in the end it will miss most, and if he died recently this is a disagreeable time to inquire.”

There must be a better way to weigh the choices that must be weighed. But how?

Schelling suggested focusing not on the value of life, but on the value of averting deaths - of reducing risks. A life may be priceless, but our actions tell us that a statistical life is not.

The engineer Ronald Howard has proposed a convenient unit, the “micromort” - a one-in-a-million risk of death. Implicitly, we constantly weigh up small risks of death and decide if they are worth it. Despite inconsistencies and blind spots in our behaviour, we value reducing risks to our own lives very highly, but not infinitely so.

We vote for governments that hold our lives in similarly high regard. For example, the US Environmental Protection Agency values a statistical life at $10m in today’s money, or $10 per micromort averted. I have seen lower numbers, and higher.

I am giving most of my figures as conveniently round numbers - there is too much uncertainty about Covid-19 to be more precise. But if we presume that 1 per cent of infections are fatal, then it is a 10,000 micromort condition. Being infected is 100 times more dangerous than giving birth, or as perilous as travelling two and a half times around the world on a motorbike. For an elderly or vulnerable person, it is much more risky than that. At the EPA’s $10 per micromort, it would be worth spending $100,000 to prevent a single infection with Covid-19.

You don’t need a complex epidemiological model to predict that if we take no serious steps to halt the spread of the virus, more than half the world is likely to contract it. That suggests 2m US deaths and 500,000 in Britain - assuming, again, a 1 per cent fatality rate.

If an economic lockdown in the US saves most of these lives, and costs less than $20tn, then it would seem to be value for money. (By way of comparison, each 20 per cent loss of gross domestic product for a quarter represents a cost of about $1tn.) One could quibble with every step of this calculation. Perhaps some of those who die were so ill that they would have died of other causes within days. Perhaps Covid-19 is not quite so dangerous. Yet it is clear that with so many lives at stake, we should be willing to pay huge costs to protect them.

We must remember something else: the risk of being wrong. We will inevitably make mistakes. The measures we take to contain coronavirus might do more damage to people’s livelihoods than necessary. Or we might allow the virus too much leeway, needlessly ending lives. In a spreading pandemic, the second mistake is much harder to repair than the first.

Fighting this virus demands economic sacrifices: not without limit; and not without end. But if not now, then when? - Copyright The Financial Times 2020

Tim Harford is a columnist with the Financial Times

1 Luke ‘Ming’ Flanagan bares his bottom half to European Parliament
2 Coronavirus: Eight further deaths and 10 new cases reported in the State
3 Gardaí investigate Dublin Black Lives Matter protest over Covid-19 rule breach
4 Double Standards for Men No 253: Lynn Ruane v Paul Mescal
5 Do I want things to go back to normal? I’m not so sure I do
Real news has value SUBSCRIBE