Why Junior Cert reform is best for students’ education

‘At third level, it is standard practice that teachers design their own course, teach it and examine it’ 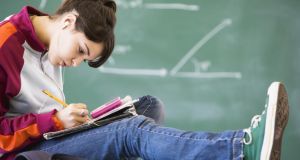 ‘The ESRI/NCCA have shown that education outcomes at the end of second level can largely be predicted at entry to second level.’ Photograph: Getty Images

The educational benefits to students that reform of the Junior Cert would bring have tended to be drowned out in the current debate.

Fintan O’Toole’s analysis on these pages (November 25th), for example, rejects the concept of teachers assessing their own students, on the premise Irish parents will use all means to advance their children’s welfare. He assumes that fairness can be guaranteed only by externally assessed State examinations.

The “brutal but fair” argument excuses and legitimates brutality on the grounds of fairness. But if Irish education is not fair, where is the justification for the brutality of its assessment systems?

It is probably true to say the State examination system is brutal for all children. Well-off parents can, however, mitigate the brutality. Everything from grinds to diet and cultural capital in their backgrounds ensures that those who start out advantaged remain so.

If every child is cherished equally, it should be expected that even where children begin from different starting points they will close the gaps as they progress through the system. There is much evidence to show that this is not the case.

It is true – even if not particularly relevant – to say that most children today are better educated than their parents.What is also true – and very relevant – is that the child’s relative position on the ladder of peer educational attainment will be largely no different from that of his/her parents’ position on that same ladder.

The Economic and Social Research Institute/National Council for Curriculum and Assessment have shown that education outcomes at the end of second level can largely be predicted at entry to second level. Anecdotally, primary teachers will assert they can predict such outcomes as early as six. Starting-out gaps do not close – instead they become entrenched and validated by examination performance. Exams are games in which disadvantaged children are always playing away.

From this perspective, it is regrettable the Department of Education has moved from its original position on the total abolition of the State examination.

The current position, where 60 per cent of the marks will be externally assessed, risks the possibility that the residual 40 per cent will be taken less seriously by schools.

External assessment does not imbue a system that is stacked against disadvantaged children with fairness. Nor is there any evidence that connects it with maintaining standards or even improving them. There are a number of highly regarded education systems – Finland’s being the most noteworthy – which have no external assessment at all.

From a policy perspective, State examinations meet two goals. Explicitly, they provide a standardised, objective test of a student performance in a summative, terminal test at a particular point in time.

At a somewhat more subtle level, however, they also provide a management tool designed to establish if teachers are doing what they are told to do. Externally assessed, State examination results are one of the only tools available to managers through which they can appraise teacher performance.

Second-level teaching can be a disempowered profession. Members of the profession are at one with their students in getting through the text book, in covering the syllabus, in outwitting the examiners and in protecting themselves from over-ambitious parents.

Against this background, creativity is eschewed as a distraction, teaching to the test becomes the norm and personal responsibility for pedagogical development and experimentation among teachers is discouraged. This pedagogical emphasis serves all students poorly.

Teachers become “advocates” for their students only because there is an externally imposed hurdle over which the student must climb. Students are not well served by teachers as “cheerleaders”.

Rather, they need the teacher as a critical friend, one who provides fair and understandable feedback to them on their work. In this role, the teacher embarks with the child on a journey of co-learning and mutual exploration.

At third level, it is standard practice that teachers design their own course, teach it and examine it. Standards are guaranteed by a relatively light touch external examiner oversight. Are these pedagogical tools too dangerous to entrust to second-level teachers?

We know the entire Junior Cycle fails large groups of students, many of whom will never recover their education or career prospects. We also suspect that even those who perform well could be performing much better with a different experience.

We also know that many teachers are highly stressed and work in extremely demanding and thankless environments. These reform proposals provide a once-in-a-generation opportunity to effect fundamental change in such environments. And we know that nothing changes without assessment change.

Tom Collins is the chair of DIT and the Institute of Technology Blanchardstown. He is former professor of education at NUI Maynooth and former chair of the National Council for Curriculum and Assessment . He writes this article in a personal capacity

1 Coronavirus: 133 patients in intensive care as pressure on hospitals builds
2 Look on the bright side: International Space Station visible in Irish skies tonight
3 A letter to Ireland from Italy: this is what we know about your future
4 Coronavirus: Letters flow to self-isolating father whose children were found dead
5 Tempers fray as coronavirus lockdown fatigue hits Italy and Spain
Real news has value SUBSCRIBE