Why ‘job-hopping millennials’ are no worse than their elders 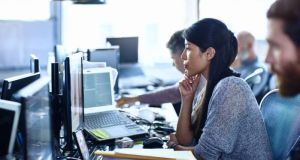 Today’s younger workers do not have the same security of solid retirement benefits that their predecessors enjoyed. Photograph: Getty Images

For years, employee engagement surveys have asked, “How often do you think about leaving the job?”

The chief executive of a multinational told me recently, though, that he and his senior colleagues had decided they were misreading the results: a high score was no longer a sign of disaffection, but simply a proxy for younger recruits’ appetite for more challenges.

He has started shifting these staff between jobs more often — every two to three years rather than three or four. They are offered secondments to other organisations, such as charities, from which they return energised and with new perspectives. He is now exploring whether to push ambitious younger staff into leadership roles sooner but, as he told me, “It’s difficult to lead other people if you don’t have that experience yourself”. Was this a prudent response, he wondered, or an old-fashioned view, based on his own more gradual career path?

There is a third possibility: that this CEO is simply facing the same challenges that have always faced employers as they work out how to meet the demands of younger recruits.

Anecdotes and data suggest that while the globalised and digitalised context is certainly different, young staff have similar aspirations to those of their counterparts of 15 or even 30 years ago, when I was a trainee.

Deloitte’s latest survey of millennials and Generation Z — born between 1983 and 2002 — suggests nearly half of this group would quit in the next two years if they had a choice. Dissatisfaction with pay and lack of opportunities to advance are the main reasons for wanting to leave. A quarter of these disenchanted staff said they had indeed changed employer in the past two years.

But US labour data for 2016 showed the proportion of employed millennials (about 22 per cent) who had worked for their employer for at least five years was similar to the percentage for workers of the same age in 2000. Median job tenure for US workers in their 20s and 30s is stable at about three years, roughly where it was in 1983, when this data was first gathered.

When I was asked to pass on the wisdom of decades to the latest intake of Financial Times editorial trainees, I doubted my tales of “how to make it in print journalism before the advent of the internet and mobile phones” would be relevant. But many of the questions they posed were similar to ones I remember asking at the same age and stage, including how to plan their careers and how to pitch for more opportunities.

“Graduates have always been ambitious, have always been demanding and will vote with their feet if they don’t feel they’re getting what they want,” says one executive overseeing leadership development at another multinational company. Yet some 60 per cent of this company’s graduates are still there five years after their two-year training programme ends, which is the same retention rate as in the 1990s.

In other words, the job-hopping caricature of millennial and Gen Z workers — and indeed, much else about generational stereotyping — does not stand up to scrutiny. They are at worst no more fickle than preceding cohorts of workers. In fact, as my millennial colleague Sarah O’Connor has written, she and her peers who graduated into a recession “crave job security above almost all else”.

It would be dangerous for employers to read this as a counsel of complacency. Today’s younger workers lack the promise of solid retirement benefits that their predecessors enjoyed. Their attitude may yet diverge from that of their predecessors as they prepare for the likelihood they will live and work longer than their parents.

Also, the fact many dilemmas faced by senior managers are the same as they always were does not make them easier to solve: they include how to persuade middle managers to accommodate the leadership demands of pushy younger workers; or how, as a smaller employer, to offer the sort of flexibility and opportunity that multinationals can.

Even so, Jonathan Trevor, author of Align, a new book on strategy, who teaches at Oxford’s Saïd Business School, says: “Organisations have created a rod for their own back by buying into this myth that there’s generational difference and that they need to react to it.”

Employers do seem to agree on one thing: younger recruits are more vocal than their senior colleagues were about challenging authority and more eager for feedback. These are among the reasons millennials are still sometimes described, disparagingly, as “needy”.

Well, let’s hear it for neediness. Employers should set aside the demographic clichés and start drawing broader lessons. They should have been providing better, more frequent feedback to everyone, irrespective of age or seniority, for generations. – Financial Times Service

1 ‘I’ve been sleeping with my girlfriend’s sister. I need help. What do I do?’
2 Ireland among countries urged to consider reinstating Covid-19 restrictions
3 Joe Biden names Kamala Harris as running mate for US election
4 Covid-19 in Ireland: Colour-coded response set to replace phases
5 Stephenie Meyer on Midnight Sun: ‘This was just a huge, pain-in-the-butt book to write’
Real news has value SUBSCRIBE