Populism not going away any time soon 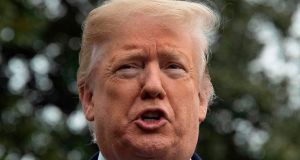 US president Donald Trump: Populists, tapping into a growing wave of voter discontent, rail against the “system” and its cronies and are not afraid to paint themselves as political saviours. Photograph: Jim Watson/AFP

The past few years have seen the steady rise, across much of the western world, of “populism”: a style of politics whose leaders, instead of simply criticising the policies of political adversaries, align themselves with the interests of the “real people” against an allegedly corrupt, arrogant and out-of-touch political establishment.

Populist leaders, whether Trump, Farage, Le Pen, or Bolsonaro, claim a new kind of moral “high ground”: whereas traditional politicians promise better policy outcomes, using rhetorical strategies that seem to assume something like “politics as usual”, populists, tapping into a growing wave of voter discontent, rail against the “system” and its cronies and are not afraid to paint themselves as political saviours.

One generally encounters two rival perspectives on the significance of populism for western democracy: first, that of populists themselves, who view populism as a “shock treatment” designed to oust arrogant political elites and bring politics back in touch with “the people”; and second, that of critics of populism, who view populist movements as posing an insidious threat to liberal democracy, undermining rule of law, and peddling exclusionary and simplistic narratives of national identity.

Both of these viewpoints are partially correct, but neither grasps the true depth of the political crisis now confronting most western democracies.

Critics of populism are right to condemn certain elements of populism, such as its tendency to advance exclusionary narratives of national identity. However, in condemning populism as a looming threat to liberal democracy, anti-populists seem to insinuate that what is under threat – our democratic institutions – are otherwise more or less in good shape, that is, more or less participatory, inclusive and responsive to the public interest.

But this is a breathtakingly optimistic assessment. Populists, though they hardly offer convincing political solutions, are right to point out the chronic dysfunctions of our technocratic and quasi-oligarchic political institutions.

It is hard to deny, after all, that the European Union suffers from a deep-seated democratic deficit, and that “party discipline” in many western democracies is a euphemism for the blind subservience of career politicians to party bosses. And it is painfully obvious that a lot of mainstream parties are losing touch with their voter base, as evidenced by the election of a wildcard presidential candidate in the United States, and recent surges in support for anti-establishment parties across Europe.

Indeed, representative democracy in most parts of the world today would be more accurately described as oligarchy – the rule of a few – rubber-stamped by periodic elections. For most western democracies delegate power to highly centralised institutions, where it is easily captured and manipulated by elite actors, be they government ministers, legislators, activist judges, corporate lobbyists or party bosses.

This situation is not remedied by periodic elections of representatives, which give most citizens very little say over the content of legislation, public spending and government priorities. Not to mention the fact that government policy is often executed through large-scale bureaucracies that are anything but participatory.

Even if political elites wished to address citizens’ problems, their hands would frequently be tied, for several reasons.

First, highly centralised and general-purpose governments, insofar as they rely on generalised rules and policies, cannot effectively adapt themselves to the intricate needs of large-scale, complex and fast-moving societies and economies.

Second, the traditional idea of a national state that polices and manages the economy in the interests of citizens is not credible in a world in which economic activities, products, services and technologies are continually changing, and many companies operate on a global scale.

Third, the basic premise of the modern welfare state, that the young are taxed collectively to support the old, is unsustainable in western countries, most of which have ageing populations.

Thus, modern polities as currently constituted, apart from facilitating the concentration of power in the hands of a few privileged citizens, are disabled from effectively discharging their traditional regulatory and welfare-providing functions.

Putting a new leader in place to “shake things up”, as populists propose, will not solve the political and economic crisis

Until such pathologies are addressed, we can expect the cycle of voter frustration and popular discontent to continue, whether it takes the form of populist politics, strikes, protests or other disruptive behaviour.

In the absence of far-reaching reforms in our political structures, putting a new leader in place to “shake things up”, as populists propose to do, will not solve the ongoing political and economic crisis.

Even if populism suffers political setbacks, as some commentators have predicted, the appetite for anti-system or anti-establishment politics is unlikely to subside until we undertake radical institutional reforms. For the basic problem we confront is not a handful of troublesome politicians, but a political system that is no longer fit for purpose.

Quite possibly, the type of reform our political system requires is more radical than anything either populists or their critics are willing to contemplate.

Quite possibly, the time has come to undertake far-reaching decentralising reforms that anchor political and economic power not in a hyper-centralised national state, but in grassroots institutions of civil society, such as local citizen assemblies, professional associations and worker co-operatives.

Structural reforms of this sort may greatly enhance the democratic accountability of our institutions and help us significantly alleviate the crippling burden of governance currently afflicting the national state.