What can Ireland learn from the UK on abortion?

Of Irish women who receive abortion care in UK, 70 per cent are married or with a partner 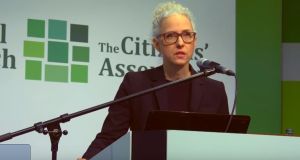 The British Pregnancy Advisory Service (BPAS) has been providing abortion care to women from Ireland since 1968.

They may involve financial hardship, knowing one’s family is complete, inadequate partner or family support, domestic violence or simply a woman feeling she is not in a position to care for a baby at that point in her life.

Only 20 per cent were not using any method at all at the time they conceived.

Of Irish women who receive abortion care in the UK, 70 per cent are married or with a partner, and nearly half have already had at least one previous birth, meaning they are already mothers. All this is in keeping with information we have for women from the UK seeking abortion.

What is different for Irish women? As previously noted, medical abortion now accounts for the majority of early terminations in the UK. Many women prefer it as it is akin to a natural miscarriage, they can avoid an anaesthetic and they can be at home when the pregnancy passes.

In contrast, the majority of early abortions provided for Irish women are performed surgically - 71 per cent, compared to 28 per cent for women resident in England and Wales.

This is because for financial and practical reasons, many women travelling from Ireland often aim to fly in and out of the UK within a day and, as medical abortion involves leaving the clinic after taking the second set of medication and going home to pass the pregnancy, it is not clinically optimal for this to happen on the way to the airport or the flight home.

Effectively, this means that women from Ireland are in all practical senses denied a choice of abortion method.

Irish women also have abortions at slightly later gestations than women having abortions who are resident in England and Wales. The vast majority, 81 per cent, of residents of England and Wales present between three and nine weeks’ gestation, compared to 69 per cent of women from the Republic of Ireland.

Nearly a third of abortions, 31 per cent, for women from the Republic of Ireland are performed at 10 weeks or over, compared to 20 per cent for women resident in England and Wales.

Earlier the better for health

Abortion is an extremely safe procedure, but the earlier in pregnancy it is performed the better for women’s physical and mental wellbeing. Reasons for later presentation include the time it takes to organise travel and make logistical arrangements, particularly for those with work and child care commitments.

What can Ireland learn from the UK? If Ireland overhauls its abortion laws, which is certainly not for me to prejudge, it would do well to avoid some of the pitfalls and problems that the UK framework presents.

The Abortion Act 1967 was passed in the UK at a time when abortion provision was almost entirely surgical and when all surgical procedures were riskier than they are today.

Few could have imagined in 1967 that early abortion could be safely provided using medication. Our laws have prevented the provision of early medical abortion in line with guidance from the World Health Organisation, which recommends that women should be able to use misoprostol at home once lawfully prescribed.

This means that women can time the passing of their pregnancy and do not have to risk bleeding or miscarriage on the way home, nor do they have to attend multiple appointments.

Dr Patricia Lohr is medical director of the British Pregnancy Advisory Service (BPAS). This is an edited version of her submission to the Oireachtas Committee on the Eighth Amendment.

5 TV guide: 23 of the best shows to watch this week