Legislating for abortion on grounds of rape alone is impossible 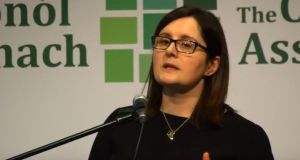 There is no “typical victim” or “typical scenario” when it comes to sexual violence, according to Dr Maeve Eogan. Photograph: Citizens’ Assembly

Sexual violence occurs in all cultures and countries. Even reading reports in the media make it clear that there is no “typical victim” or “typical scenario”.

Disclosure of sexual violence enables access to appropriate medical and psychological care and also facilitates commencement of a judicial investigation (if the person chooses to engage with the criminal justice system) and in Ireland a network of Sexual Assault Treatment Units (SATUs) provide responsive care to men and women who disclose sexual crime.

This includes emergency contraception, where needed and therefore pregnancy after rape is not frequently seen in the group of patients who attend SATU services.

But what about those who are pregnant because they did not disclose the incident and thus did not receive emergency contraception?

Or imagine being a woman who countered a whole range of emotions to pluck up the courage to access emergency contraception after rape but in whom that medication failed, and she now finds herself pregnant?

The Citizens’ Assembly and numerous Irish opinion polls, as well as the Joint Oireachtas Committee, have identified, by a significant majority, that pregnancy as a consequence of rape/sexual assault is a scenario where women should have the choice to terminate pregnancy.

At first glance this seems like a “solution”, but the reality is that legislating and regulating for termination of pregnancy on these grounds alone is impossible.

Firstly, it can be extremely difficult, and frequently impossible, for survivors of sexual violence to tell anyone about it at any time, let alone the concept of “mandatory disclosure” in order to “persuade” a person or panel that you “deserve” access to safe and legal termination of pregnancy.

As Noeleen Blackwell from Dublin Rape Crisis Centre said in her submission to the Joint Oireachtas Committee, such a suggestion “disempowers the person who has suffered the rape, while empowering those giving permission to access termination of pregnancy. Once more, the consent of the victim is seen as irrelevant.”

Secondly, even in the context of intimate examination, there is no specific physical finding or type of vaginal injury that conclusively determines that unwanted sexual contact has occurred.

Genital injury is not an inevitable consequence of sexual assault and lack of genital injury neither implies consent by the victim or lack of penetration by the assailant.

Therefore the only equitable, workable and compassionate way to offer choice to women pregnant after rape is to provide termination of pregnancy with no restriction as to reason within a defined gestational limit.

These factors underpinned the considerations of the Joint Oireachtas Committee which recommended that legislation for and regulation of termination of pregnancy, up to 12 weeks gestation without forcing disclosure of a specific indication, should occur.

While some women will access termination significantly in advance of 12 weeks, other women will need a longer period of time (up to 12 weeks) to recognise the pregnancy, seek appropriate support and make an informed decision that is appropriate for her.

Of course it is important to remember that the first step towards introducing safe, accessible woman-centred options for women who are pregnant following sexual violence is to vote to amend the Constitution to remove article 40.3.3 (the Eighth Amendment), it is only then that legislative change and patient-focused reform can happen.

As long as the Eighth Amendment exists, women who become pregnant as a consequence of rape will continue to be some of the thousands of women who purchase and self-administer unregulated medications online with no medical support or travel to the UK and other countries for termination of pregnancy.

1 Covid-19: Museums, cinemas set to reopen next week as Varadkar warns of New Year restrictions
2 Stir-crazy Dutch holidaymakers set to descend on Caribbean island
3 Bloomberg ranks New Zealand top in fight against Covid-19 - but how did Ireland fare?
4 Alison Curtis: My guilt at not going for a second pregnancy
5 How to gift your child a house deposit . . . tax free
Real news has value SUBSCRIBE