Ireland has promised to follow EU rules. But the reality seems harsher 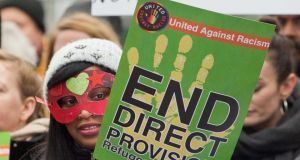 Harsh regime: along with the direct provision of bed and board, the ban on working makes Ireland a deeply unattractive place to claim asylum. Photograph: Tom Honan

For more than two decades Irish governments have refused to permit asylum seekers to look for or enter employment. Two excuses are trotted out: it would lead to abuse of the Common Travel Area with the UK; and allowing them to work would prompt a surge in the number of people seeking asylum in the Republic.

The prohibition on employment is accompanied by a prohibition on access to social welfare, bar a payment of €21.60 a week. Along with the direct provision of bed and board, these make Ireland a deeply unattractive place in which to claim asylum.

But in May last year the Supreme Court indicated that it would declare the employment prohibition unconstitutional. It took until late November for Minister for Justice Charlie Flanagan to indicate how the State would respond. He announced that Ireland would opt into the European Union’s reception-conditions directive, which allows asylum seekers to work in certain circumstances. But the opt-in process will not be complete by February 9th, the day on which the Supreme Court will declare the employment ban to be illegal.

If an asylum seeker wants to enter PAYE employment, the job must, in general, pay more than €30,000 a year, and cannot be in health, retail, hospitality or social care

This week the Government announced details of the interim regime that will operate until the EU directive comes into force. These temporary measures in essence make asylum seekers’ right to work illusory.

If an asylum seeker wants to enter PAYE employment, for example, the job must not be one that an EU citizen or person with full migration permission could take up. It must also, in general, pay more than €30,000 a year, and cannot be in any of well over 70 sectors, including health, retail, hospitality and social care. Given the preponderance of women in these professions, these restrictions represent double discrimination against women who are seeking asylum.

As if all these restrictions were not mean enough, asylum seekers or their potential employers will have to pay between €500 and €1,000 for a six- to 12-month employment permit.

Asylum seekers seem to be freer to become self-employed – but very little detail is provided about how this right to enter self-employment will be exercised beyond an administrative scheme operated by the Department of Justice.

The open question is to what extent the department will be able to retain these restrictions – and so the disincentives to seeking asylum in Ireland – once the EU directive comes into force.

In its judgment last year the Supreme Court recognised that the Oireachtas can limit asylum seekers’ freedom to work. There can be significant distinctions in the field of entry to employment between citizens and noncitizens, and the court said that the Oireachtas and the Government can define the precise contours of asylum seekers’ right to work; the courts will, in the main, respect the decisions of the elected branches.

The Supreme Court noted that the “pull factor” argument is a legitimate one that the Oireachtas might refer to. The Oireachtas may determine that, if it grants the right to work, it may be more difficult to remove an asylum applicant who is not entitled to protection. In addition, the Oireachtas may have a power to limit asylum seekers’ freedom to work “to defined areas of the economy, perhaps where there is a demonstrated need”.

If the Supreme Court’s focus on the dignity of the person as inherent within the right to work is to mean anything, the interim scheme, as now proposed, must be resisted

This week the Dáil passed a motion allowing the Government to opt into the EU’s reception-conditions directive – but it passed it without detailed discussion of how limited asylum seekers’ temporary right to work will be and the rules that will apply once the directive comes into force.

This is deeply concerning. A debate did occur in the Seanad, where Senators supported Ireland’s opting into EU law. But several Senators noted the interim scheme’s lack of generosity on asylum seekers’ right to work.

For those of us familiar with how the Department of Justice and Equality operates, this mean-spirited scheme is, unfortunately, nothing new. If the Supreme Court’s focus on the dignity of the person as inherent within the right to work is to mean anything, this interim scheme, as now proposed, must be resisted.

I hope the Supreme Court will tell the Government on February 9th whether this interim scheme respects the freedom of asylum seekers to look for or enter employment that it laid down in its judgment last May. This would be preferable to waiting for a legal challenge.

The Department of Justice needs to go back to the drawing board and come up with a scheme that genuinely protects the constitutional nature of this right for asylum seekers.