Davos: A chance to make the case for solidarity 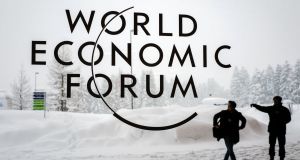 The annual World Economic Forum in Davos appears in many ways an increasingly anachronistic gathering. In a world where so-called elites – whether in business or politics – are under fire, the sight of the wealthy discussing the needs of the less well-off in a posh ski resort can often ring hollow. The expected presence this year of US president Donald Trump will only add to the surreal nature of the occasion.

The gathering happens this year against a surprisingly strong global economic backdrop. The IMF has just upgraded its forecasts for world growth and while the projections for the UK have not been increased, even there the expected hit after the Brexit vote has not emerged. US growth has been strong and may get a short term boost from the tax reform Bill, while the recovery in the euro zone economy has exceeded expectations.

The IMF now expects world economic growth of 3.9 per cent this year, 0.2 of a point higher than its previous forecast. As ever there are dangers – Brexit has not yet happened, there are some fears about the financial markets and a general sense that if trouble hits, the buffers have not been rebuilt since the last crisis. Government finances worldwide are only slowly recovering from the crash, public and private debts remain high and interest rates are already at low levels.

The leaders would be well advised to pay heed to IMF managing director Christine Lagarde, who said this period of higher growth should be used to “repair their roof” – working to make growth sustainable and spread the gains more widely. Environmental concerns will also feature, particularly given President Trump’s scepticism about climate change and the uncertainty it brings about global action on the issue, as will the opportunities and threats from the rapid advances in technology across many spheres.

Trump’s presidency – and his “America first” message – are the clearest sign of a move away from the old multilateral approach to tackling issues like climate and trade. In the opening address at the forum, Indian prime minister Narendra Modi warned scientific and technological advances are “creating fault lines that can inflict a very painful wound”. However, he argued that global leaders needed to show solidarity to address this. With other leaders likely to echo this, President Trump’s message may stand in contrast to the wider mood.

The old model of international cooperation run through institutions such as the the UN, World Bank, IMF and the World Trade Organisation clearly has its failings. In many ways the old system is broken – but the question should be how to repair it, rather than abandon it. In a globalised world it is surely only stating the obvious to recognise that many key issues can only be tackled cooperatively. If there is one useful message to come out of Davos, this might well be it.