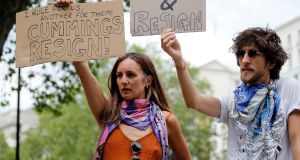 Noise pollution has abated in lock-down, but the piercing alarm bells from America and Britain are ringing louder than ever. As other countries look on, we must interrogate how we can prevent falling as far as these two nations. How do we hold on to civility and decency, when it has evaporated elsewhere? What kind of environment gave rise to such toxicity? As Donald Trump and Boris Johnson ascended to their country’s highest offices, it was tempting to say “it’s over”, and in many ways, “it” is; truth, logic, accountability, normality.

The latest Dominic Cummings scandal shows, again, a British political establishment that is obnoxious, its corruption and lies hiding in plain sight. This matters, but the successive scandals - a subconscious tactic of discombobulation - hide much more embedded problems. The British media has a role to play in de-contextualising what is important. When all you have are scandals, nothing becomes scandalous, and the likes of Cummings and Johnson are able to deflect and ignore the concept of culpability.

Boris Johnson is the prime minister. What did they expect? Send in the clowns, and you wake up in a circus

Early on in the Trump era, people talked about the “red meat” being thrown to the White House press corp, as they scavenged over the latest gaffe. Across an ocean, British political media orbits scandal like a swarm, subsuming online hysteria, and meanwhile the hive is left unattended, so god knows what’s happening that’s actually real, that’s genuinely important. Soon, all you have is a succession of crises, and very little information. It’s not that having a cast of increasingly ridiculous and incompetent villains makes the Tories less capable of playing the media, in fact it makes them more equipped to do so. Remember: the lower they stoop, the lower the public’s bar for their behaviour also falls.

Just as Trump has framed contemporary American politics as reality television, in Britain, political coverage embodies the great British form of soap opera. Who’s in favour this week? Who screwed up? Who’s having an affair? Who’s having a fight? All the while, knowledge and comprehension of systems and processes is lost. There is little context in the episodic churn.

Of course the latest Cummings scandal is newsworthy, but the “shock” that surrounds is numbing. How can one be shocked by something Cummings does? He’s Dominic Cummings. Boris Johnson is the prime minister. What did they expect? Send in the clowns, and you wake up in a circus.

A crucial action for those looking on with horror as both the US and Britain fall apart, is to immediately look back at ourselves. The more we know ourselves, the less likely we are to betray ourselves, and each other. A lot of this is about empathy, but it is also about self-knowledge.

The reason America, for example, can’t turn itself around is because it refuses to acknowledge, never mind treat, its central malady. The toxicity at the heart of America is racism. It’s a country full of white people who have never confronted the fact that their so-called “freedoms”, and their country’s economic power, were built on slavery. The cruelty now being meted out to the entire population - although of course because America is so racist, people of colour will continue to be punished more harshly - can be summed up by Angela Davis’ famous line: “If they come for me in the morning, they will come for you in the night.”

Similarly, Britain has never meaningfully confronted its racism, which is colonialism, building an “empire” on the back of invading and pillaging and inflicting misery on whatever shores its brutal mercenaries dressed up as representatives of a made up crown landed upon. Colonialism is a boomerang: it eventually comes home. If they come for me in the morning, they will come for you in the night. The most obvious manifestation of colonialism in Britain is the acceptance and maintenance of class. The class system says: we are the kings and you are the peasants, and that will never change. How can a British person be aghast at someone blithely wielding authority without any consequences, when they live in a monarchy, and when one of their political chambers of power is stacked with “Lords” who assume such positions through hereditary birth right?

On Monday, David Lammy tweeted, “Remember when the UK was respected around the world? Now imagine how we must look today.” Lammy is a rare British politician who has consistently stood up against the trolling of society the Tories enjoy so much. But even he cannot escape British exceptionalism. When was the UK respected around the world, beyond superficial Anglophilia, which is - red flag - primarily an American pursuit? Britain’s “former glory”, which the Year Zero-ists of Brexit were so desperate to restart, is violence. This is not even in the past. The violence of British colonialism is embedded in the fabric of the world, in the horrors of illegal wars, in the consequences of bleeding nations of their resources, in the couldn’t-give-a-toss attitude towards Ireland. And now, Britain turns its truncheons on itself, another phase in the masochism of Tory brutality which has pummelled everyone from miners to refugees.

The process of rebuilding can only happen if there is a period of profound self-reflection, a real and honest acknowledgement of who you are, and why you are

If one does not confront the basic truths of one’s national identity, one will not be able to trace a path forward. Everything becomes a fiction, a narrative designed to block any kind of self-examination. There is lots of talk about gaslighting these days, but the foundational component of gaslighting begins far from the corridors of power. The British have been gaslighting each other and themselves for generations. This is the personal propaganda cycle that colonialism instigates. It creates a false hierarchy of superiority rooted in fictions about magical personal and national prowess.

Other countries need to pay attention to modern Britain. What has happened is instructive. Accepting plummeting standards in media, possessing a pathological deference to posh bullies, being ignorant of one’s history, accepting inequality as some kind of natural law, celebrating buffoons, and a blithe and arrogant exceptionalism is the real downfall, not Dominic Cummings’ lies.

The good news is, there is a way out. Throughout history, empires fall, societies implode. But the process of rebuilding can only happen if there is a period of profound self-reflection, a real and honest acknowledgement of who you are, and why you are. So stop the “shock” at the latest scandal, and start looking in the mirror.